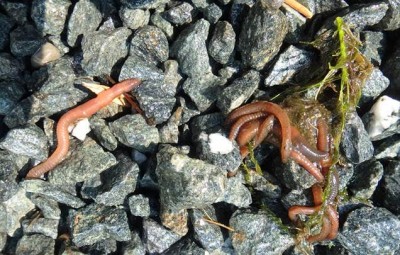 How Long Can Earthworms Live Underwater?

Today we will discuss earthworms and how long they can live submerged underwater. A reader asked us this question because he is dealing with colonies of earthworms in his koi pond. He explained, “I have a koi pond that’s filtered with completely submerged filters. These filters are cleaned once a year. Each year during the cleaning process I find colonies of earthworms in the filters. These filters are cleaned in late May or June, and I run them right through the summer and autumn until the first freeze, at which point I unplug them and don’t mess with them until I clean them during the spring.” He would like to know how long earthworms can survive submerged underwater. 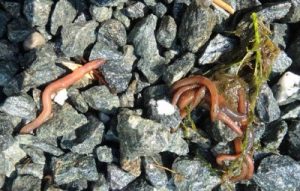 Earthworms are fascinating creatures for many reasons, one of which is the way they breathe. Earthworms don’t have lungs, so they don’t inhale and exhale air the same way that other animals do. Instead, they use their skin. Oxygen and carbon monoxide pass through an earthworm’s skin during a process called diffusion. In order to absorb oxygen, an earthworm’s skin must be moist. If their skin is too dry they won’t be able to absorb oxygen and they will suffocate. In general, there usually isn’t enough oxygen in water for worms to live permanently underwater and they will eventually drown, but this process usually takes several weeks. Since the oxygen levels of different water sources can vary, there isn’t an exact time frame for how long earthworms can survive underwater, but it is generally considered to be about 2 weeks.

It isn’t clear to us if this reader reached out because earthworms are surviving in his submerged filters for months (which would be truly incredible!), or if he has been discovering colonies of dead earthworms at each annual filter cleaning. If it is the former, it is possible that the earthworms return to the filters days or weeks before the spring cleaning and aren’t actually living in the filters for the entire off season. If it is the latter, we recommend that he remove the filters when he unplugs them to clear out the colonies of earthworms and to transfer them into some moist soil where they can flourish.

To conclude, a reader asked us how long earthworms can live underwater. There isn’t a clear-cut answer to this question because it depends on the oxygen level of the water and the worms, but in general earthworms can be expected to live for about 2 weeks submerged underwater before they drown.

Article Name
How Long Can Earthworms Live Underwater?
Description
A reader asked us how long earthworms can live underwater. There isn't a clear-cut answer to this question because it depends on the oxygen level of the water and the worms, but in general earthworms can be expected to live for about 2 weeks submerged underwater before they drown.
Author
Dori Franklin
Comments: 1 Posted by: Worm Researcher Dori Categories: Earthworms