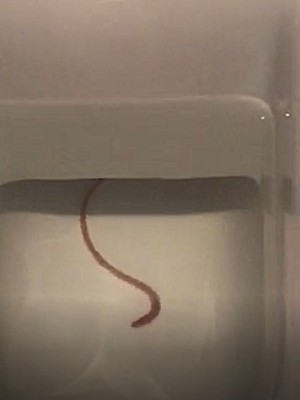 “I would like to know how [this worm] could have gotten in the toilet?” asks this reader in Medway, Kent, who found this worm in his upstairs toilet. The worm looks to be thin and long, with a pink-brown body and no obvious appendages or bristles. 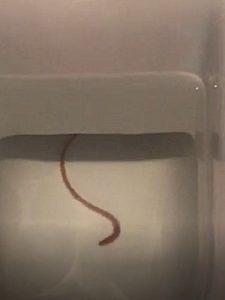 From the video and context our reader sent in, we have identified this as an earthworm. Earthworms are annelids (meaning they belong to the phylum Annelida and are segmented worm-like creatures) and are amongst the most common of worms one can find anywhere in the world. They live in the soils of our forests, plains and backyards; pretty much anywhere where there is dirt and enough moisture to keep them happy. It only takes a quick internet search to find out how revered earthworms are by gardeners and scientists alike. That is because this little creature is the backbone of most biodiverse ecosystems. That is to say that without their nutrient-rich excrement (which they make by eating and breaking down decomposing organic materials), much of the planet’s vegetation would go without sustenance, and thus our environment would suffer.

As earthworms live underground, they can often find their way into things that too are underground, such as pipes. It is most likely that this earthworm got into our reader’s toilet because there is a leak somewhere in the pipe underground. It could also have simply found its way up there from the sewer system; as earthworms are attracted to decomposing organic materials, it may have chosen our reader’s toilet in search of more food. In that case, this might be a sign that our reader’s upstairs bathroom has been experiencing some neglect in terms of cleaning. In fact, regularly cleaning one’s toilet, and entire bathroom for that matter, is a sure way to prevent a whole host of curious critters that might find their way up one’s drains. Either way, we think it more likely that there is a leak somewhere underground and the earthworm got in that way. Additionally, we think it is worth mentioning that as the bathroom is upstairs, we think there is little chance that the leak is in the house, as the earthworm would not have easy access there. It is more likely that the leak is in a pipe underground. That said, if our reader does think that he might have a leak inside the house (signs may include stale air, mold and stains on the ceiling of the room below the bathroom), then we urge him to contact a professional to deal with this issue.

To conclude, the worm our reader found in his toilet is an earthworm. The most likely explanation for how it got there is through a leak in the pipe somewhere underground. These creatures are not to be feared, and our reader can simply move the earthworm outside. Naturally, in any case, we also encourage our reader to continue to clean his bathroom regularly so as to prevent other worm-like creatures from finding their way into his home.

Article Name
'How Do Earthworms Get Into Our Toilets?' Wonders Reader After Finding One in His Bathroom
Description
"I would like to know how [this worm] could have gotten in the toilet?" asks this reader in Medway, Kent, who found this worm in his upstairs toilet. The worm looks to be thin and long, with a pink-brown body and no obvious appendages or bristles.
Author
Worm Researcher Anton
Share the knowledge

This many people searched for this info: 2,622