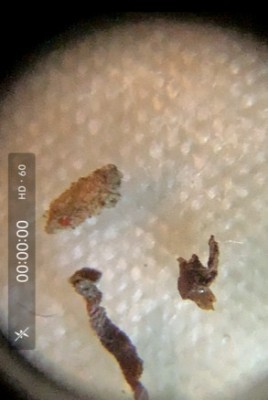 What seems to be a variety of organisms of various appearances have been found by this reader, who sent us screenshots she took from a video showcasing the organisms moving. The first pictures displays what looks to be a collection of brown and/or tan pieces of matter, the second showcasing the worm that “looks like a piece of hair but isn’t”, and the third shows the “fuzzy” “sack” that is taken through the lens of a microscope. 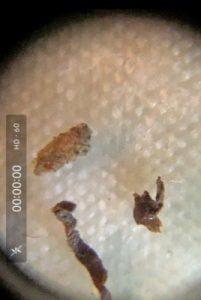 We wish to begin by addressing our assumption that these are, in fact, various organisms of unrelated species. In her query, our reader seemed to indicate that these were all variations of the worm that looks like hair, but we would disagree with this. These photographs exhibit organisms of such various appearances that we doubt this is the case. Furthermore, it will be difficult to confidently identify any of these species given that we do not really get a proper idea of the size of these organisms. Our reader mentioned using a microscope to look at the “sack”, which opened up for a “little tiny clear worm” “with a dark tip” to emerge, but does not specify if all of these shots were taken through a microscope. Ergo, we do not know what these organisms really look like to the naked eye. Nonetheless, we will try our best to provide an idea, or sense of what these organisms might be. 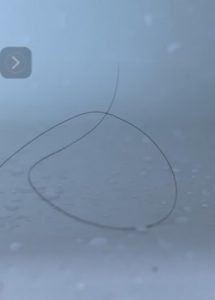 Firstly, our reader elaborates on her discovery of the organisms, saying that in the case of the hair-looking worms, she saw them “lifting up and down”, and that there was no “motion disturbance” from herself or from fans in the room. She reports being scared to touch it, and while she was trying to provoke the worm, could not keep her hand still. Following this is the “sack” which she observed under the microscope as the aforementioned “clear” organism with a “dark tip” came out of the sack.

In regards to the first image, it is difficult to tell what this may be. The forms of the three objects in the photograph are so irregular that we would not assume them to be larvae of any kind, nor any worm, and really only one of the objects is somewhat worm-shaped. If anything, we would assume these to be the discarded pupae of some sorts. Unfortunately, we cannot say for sure what these are. On the other hand, the hair-like worms are most likely horsehair worms. Horsehair worms are marine parasites which mature in the bodies of insects before breaking out of their host’s body and killing it. They completely are harmless toward mammals though, so our reader needs not fear them. Lastly, we would assume that the worm which came out of the “sack” was a casemaking clothes moth caterpillar. These larvae feed on animal-based fabrics and can prove quite the pest as they commonly infest homes and chew holes through clothes, upholstery and other fabrics. These critters weave cases of silk which they hide in to feed on their findings. However, given that this organism had to be viewed through a microscope, it has us questioning if this really is a casemaking clothes moth larva. While these larvae are small in size, they are not microscopic. 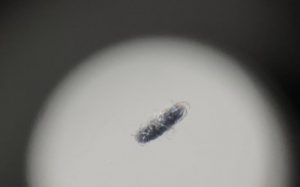 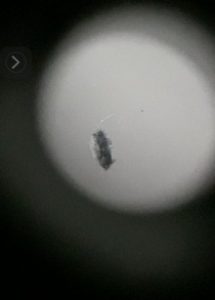 On that note, what our reader can do to receive 100% confident identifications is email us again or comment down below, with or without new pictures, and just let us know which of these organisms could be seen by the naked eye and how big they were. Moreover, if our reader wishes to get a second opinion, we encourage her to take samples of all of these organisms to her local county extension office or to the entomology department at a nearby university to get them identified by experts. In any case, we would nonetheless assume that the hair-like worms are horsehair worms and the worm in the “sack” is a casemaking clothes moth larva.

To conclude, among the various organisms that our reader found, we believe that one of these is a horsehair worm, one a casemaking clothes moth caterpillar, and one we cannot identify. Regardless of our lack of certainty in these identifications, we hope that this article was still helpful to a certain degree for our reader and that she could take something away from it. Like we said before, she may feel free to send more information, questions and/or photos if she thinks we could elaborate more on this case with more material to go on. Likewise, we encourage her to bring samples of these organisms to the locations listed previously if she wants a second opinion on their identities. Otherwise, we hope our reader can be rest assured that she likely has nothing to fear about in regards to her discoveries!

Article Name
Horsehair Worms and Casemaking Clothes Moth Larvae Discovered Among Various Organisms by Concerned Woman
Description
What seems to be a variety of organisms of various appearances have been found by this reader, who sent us screenshots she took from a video showcasing the organisms moving. The first pictures displays what looks to be a collection of brown and/or tan pieces of matter, the second showcasing the worm that "looks like a piece of hair but isn't", and the third shows the "fuzzy" "sack" that is taken through the lens of a microscope.
Author
Worm Researcher Anton
Comments: 0 Posted by: All About Worms Categories: Case Bearing Larva, Parasite Worms, Worms Found in the House