A reader from Maine wrote to us about some long, thin worms she found in her mulch after it had been raining for a few days. Any time we hear of long, thin worms, we immediately think of horsehair worms (sometimes incorrectly spelled “horse hair worms”), which are nothing if not long and thin, shockingly so, in fact, to the point where you might not even think a horsehair worm is any sort of worm at all. (It looks more like, well, a horse hair, one taken from a horse’s tail.) The reader said she was happy to coexist with the worms as long as they are not harmful to her or her plants. Fortunately, horsehair worms aren’t harmful to either (although they are harmful to some types of insects – more on that in a second), so if our reader found a horsehair worm, she has nothing to worry about.

First, let’s take a look at the picture our reader sent us: 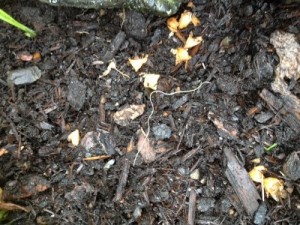 It’s somewhat hard to see, but if you look closely, you’ll see a string-like creature in the middle of the photo. This is the horsehair worm (or what we believe is a horsehair worm – we can’t be absolutely certain, but we’re pretty confident in this case.) According to the reader, the creatures she found are about four inches (about 10 centimeters) long, which is actually not very long for horsehair worms. They are commonly a foot long, and they can even reach lengths of around three feet, yet they are extremely skinny, no larger in width than the lead of a mechanical pencil, to use the standard object of comparison. (You can check out a picture of a longer horsehair worm here, in an article we recently wrote.) As we said, horsehair worms literally look like horse hairs, and long ago people actually thought that these worms were horse hairs that acquired life.

This fantastical tale of spontaneous life is, alas, not true. Rather, horsehair worms are roundworms (a.k.a nematodes) that primarily prey on other insects, making them parasitic. Their life cycle is quite bizarre and somewhat disturbing. The larval form of horsehair worms live in small cysts on certain types of plants. Insects (like crickets and grasshoppers) will eat these plants, unknowingly allowing the horsehair worm larvae inside of them. The afflicted insect’s quality of life quickly deteriorates from here as the horsehair worm slowly grows inside its host, absorbing the nutrients that the insect consumes. The horsehair worm will grow inside an insect for anywhere from four to twenty weeks. After this period, the horsehair worm will exit a hole in the insect’s body (e.g., its mouth), but only if the insect happens to be near water; the worm needs to get to water once it exits the host insect to survive. This is why horsehair worms are commonly found in swimming pools, puddles, and other bodies of water with which humans frequently come into contact. The reader found her worms after several days of rain, so we presume that it was during this period of rainfall that the horsehair worms took their leave. These worms will quickly dry out and die, however, unless they find a more permanent body of water.

Our reader found long, thin worms after it rained, so we’re fairly sure she came across horsehair worms. Horsehair worms are not harmful to plants or humans (or really anything other than a few different kinds of insects, as well as millipedes and centipedes), so our reader can safely coexist with them, enjoying all the while their intensely strange body dimensions.

1 thought on “Horsehair Worms After Rain”