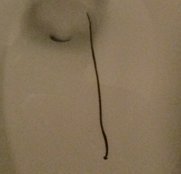 “This morning I discovered a worm swimming in my toilet.” So starts a reader’s email that we were sent a few days ago. (The reader originally contacted us through our All About Worms Twitter account.) The reader goes on to say he believes the worm in his toilet is a hammerhead worm, and indeed it looks exactly like a hammerhead worm, but he wasn’t particularly worried about identifying it. Rather, he was curious how the worm got in his toilet. He was wondering if it was possible that the worm navigated its way through his pipes to the toilet, perhaps coming up from the sewer. He also wondered if his “worst nightmare [had] been realized,” which is that the worm somehow came out of his body. So, the question before us is: how did a hammerhead worm end up in a toilet?

First, here is the picture of what our reader found:

The image is a little small, but we blew it up a bit so you can see that this worm has a head that looks like a hammer, which is, as you might expect, one of the defining features of hammerhead worms. We have written about these worms several times before, so if interested you can look at our general overview of hammerhead worms, and you can also look at an excellent picture of a long, brown hammerhead worm with black stripes in another article.

While we know a few things about hammerhead worms, we never heard of them being in the toilet. In general, when people find worms in the toilet, they are finding some sort of larva, most frequently moth fly larva, at least in our experience. However, the occasional worm turns up in toilets, as when someone wrote to us about a horsehair worm in their toilet. It isn’t especially surprising that worms are occasionally found in toilets given that their bodies need to stay moist to survive. If a worm found its way into your house, it would be natural for it to navigate to a place with plenty of moisture, like a toilet bowl. So, although we have never heard of a hammerhead worm in a toilet, it isn’t deeply mysterious that one was found there.

Of course, this doesn’t really answer our reader’s question, as he wants to know how the worm got into his toilet. On this matter, we must confess we don’t know. To prevent desiccation, hammerhead worms (like earthworms) spend a lot of their time beneath the soil. Perhaps the pipe beneath the toilet has a small break or gap in it and runs into the soil beneath our reader’s house, giving the hammerhead worm a point of entrance into his sewage system. Obviously, we have no idea what the reader’s living situation is, and thus we don’t know if this scenario is possible. If not, maybe the worm rode in on the shoe or pant leg of someone who went to the bathroom, or maybe it just crawled there after entering the house under a door or through some crack in the foundation. Finding itself on the bathroom floor in need of a water source, it might have made its way into the toilet. Again, this is clearly pure speculation, but it’s the type of reasoning that needs to be applied to the situation. The worm entered the reader’s home, however this might have happened, and that’s how it ended up in the toilet. As a corollary, the worm did not come from anyone’s body, as a hammerhead worm is simply not the type of worm that afflicts one’s digestive track. So, the reader’s “worst nightmare” has definitely not been realized.

Unfortunately, we can’t say exactly how a hammerhead worm ended up in our reader’s toilet, and it is a little strange to find one there, but it’s not completely surprising. And no matter how it might have ended up there, we can confidently say it didn’t come from someone’s body.

Article Name
Hammerhead Worms in the Toilet
Description
How did a hammerhead worm end up in a reader's toilet?
Author
All About Worms
Share the knowledge

4 thoughts on “Hammerhead Worms in the Toilet”