Half Black and White Worms in Patient Bed

A reader reached out to us about a creature she found in the bed of a patient. According to her, the creature looks like a very tiny worm that is half black and half white. She has seen 2 over a few weeks. The bed they were found on belongs to a quadriplegic patient who stays in the bed 90% of the time. Our reader wants to know what kind of worm this is, and what she should do about it.

Since we don’t have a photograph to examine, we will have to rely solely on her description. What kind of a worm is very tiny, half black and half white? Our first idea is that she has probably found larvae of some sort, not worms. Larvae may mature into flies, beetles, flies, moths, or butterflies. The description she provided roughly matches that of drain fly larvae: 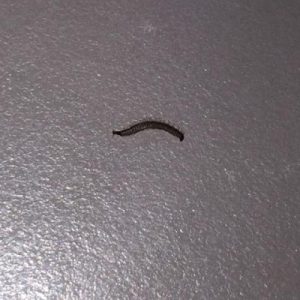 Drain fly larvae are tiny creatures that have white bodies with black heads. While the description is a match, we don’t think a bed is a suitable or desirable environment for drain fly larvae. They usually hang out in drains and other moist environments where they feed on organic matter and sewage. Based on the location of where the specimens were found, they probably aren’t drain fly larvae.

Unlike drain fly larvae, carpet beetle larvae are found in beds pretty regularly. These larvae eventually mature into beetles, but during their larval stage they eat animal products, linens, and other fibers. Furniture carpet beetle larvae have dark brown and white stripes, so they could potentially match the description: 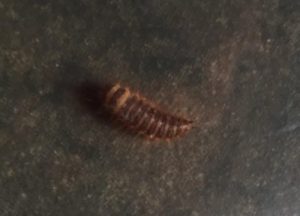 If she recognizes the creatures as carpet beetle larvae, this article provides a natural way to get rid of the larvae. We don’t think that the creatures our reader discovered are parasitic or coming from the human, but we cannot be certain without a photo. If the patient is experiencing any symptoms that might suggest he is suffering from a parasite, we encourage her to inform his doctor as soon as possible.

In conclusion, one of our readers found a few tiny worms that are half black and half white on a patient’s bed. We believe she found larvae of some type, potentially carpet beetle larvae, but we aren’t sure since we don’t have a photo. Because we don’t know what kind of worm it is, we don’t have a clear answer on how to handle the situation. We suggest changing the sheets, cleaning the room, and sending in a photo that we can use for identification.

Summary
Article Name
Half Black and White Worms in Patient Bed
Description
One of our readers found a few tiny worms that are half black and half white on a patient's bed. We believe she found larvae of some type, potentially carpet beetle larvae, but we aren't sure since we don't have a photo.
Author
Dori Franklin
Comments: 0 Posted by: Worm Researcher Dori Categories: Worms Found in the House