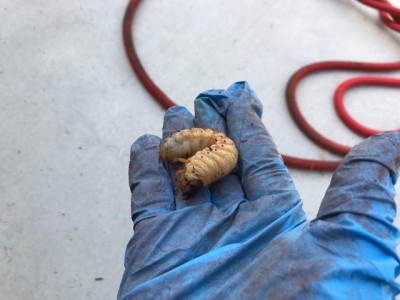 Recently a reader wrote to us from Escondido, California. She sent us a photo of a white worm-like organism that she discovered in a bag of red hardwood mulch from Lowes. She believes the creature is a grub, or beetle larva, and we agree! She wants to know what kind of grub this is, or in other words, what kind of beetle this creature will mature into. Here is the picture she sent us: 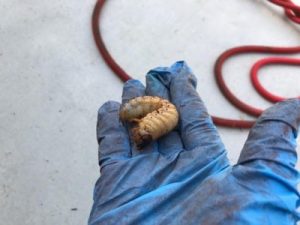 While we are confident that this creature is a grub, we aren’t sure of the species. Most beetle larvae look very similar, and can be hard to distinguish from each other during the larval stage. They often have plump cream colored bodies, brown heads, and 6 prominent legs. As you can see from the photograph, the larva in question has all of these qualities.

We believe that our reader has discovered a White Grub, also known as a Lawn Grub. This is a general name to describe the larval stage of scarab beetles. Species of scarab beetles include Japanese beetles, European chafer beetles, green June beetles, May beetles, Oriental beetles, and Asiatic Garden beetles. As we mentioned before, all the larvae of these beetle species look too similar to distinguish, especially just by a photograph. When the grubs develop into adult beetles, they are easier to distinguish for a couple of reasons. First, different species of adult beetles have much more distinctive looks. Second, they can be identified by what food they eat, since they are often considered pests by gardeners and farmers. So how did this White Grub end up in a bag of red hardwood mulch? We don’t know! If it was alive, we encourage our reader to simply place the grub back outside in the natural environment.

To wrap up, a reader found a White Grub, or scarab beetle larva, in a bag of mulch. We aren’t sure which species of beetle this larvae will mature into. ?

Article Name
Grub Discovered in Bag of Mulch
Description
A reader found a White Grub, or scarab beetle larva, in a bag of mulch. We aren't sure which species of beetle this larvae will mature into. ?
Author
Dori Franklin
Share the knowledge

This many people searched for this info: 2,139