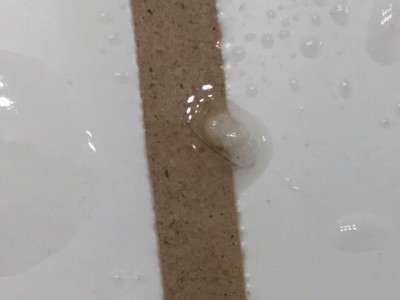 Grout Worms: What are They and What Do They Look Like?

What looks like small, black worms were photographed by this reader, who wonders if they are grout worms. The photographs display organisms with an array of various body shapes; there are small curled up bodies, long straight ones and the last photograph is of what simply looks like a black dot. 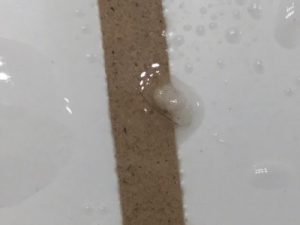 Grout worms are the larval form of the drain fly, and are more commonly referred to as drain fly larvae or moth fly larvae. These worm-like creatures are black in color, and can vary in length from 0.2-0.4 inches (4-10 mm). The adult flies resemble tiny moths, being fuzzy and larger than a regular house fly, with a uniform black body and small, papery wings. The larvae of the drain fly are most commonly found in bathrooms, but can surface in any room with some kind of drain in it, like a kitchen or a laundry room. They will appear when there has been a lack of use or consistent cleaning of the bathroom (or other room), and lay their eggs on the fine film that forms in a drain when it has gone uncleaned for a long period of time. They feed on decomposing organic matter in the drains and pose no real threat to humans or animals alike.

So, to answer our reader’s question, yes it is very likely that these are grout worms/drain fly larvae, given the location in which they were found, and the sheer number of them, as well as the size and shape of some of the organisms pictured (if we are to assume they are organisms and not some mildew or mold), one which is long and thin, and the other the aforementioned black dot. The long thin worm looks almost like a horsehair worm (a parasite which only infects insects and crustaceans), but we have no idea what the ‘black dot’ would be, given how devoid of physical characteristics it is. If any of our other readers have any ideas as to what these organisms are — if they too are related to the drain flies, or if they are some separate organisms — then they may feel free to voice their opinions in the comments section below. 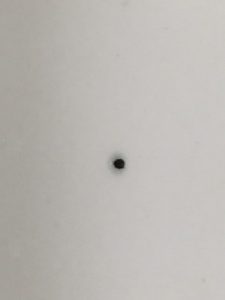 To conclude, it is most likely that the worms our reader found are indeed grout worms/drain fly larvae. We urge him to simply keep his bathroom (or whatever room these were found in) consistently cleaned, but to clean it more fervently and more often in the next two weeks (cleaning the drains every day or every other day) in order to rid the drain of the films and nests of eggs that may be there. It might also be a good idea to apply the same method to all of the drains in his home (sinks, drains in the floor, toilets, etc.) so as to ensure the infestation does not spread. Best of luck to our reader!

Article Name
Grout Worms: What are They and What Do They Look Like?
Description
What looks like small, black worms were photographed by this reader, who wonders if they are grout worms. The photographs display organisms with an array of various body shapes; there are small curled up bodies, long straight ones and the last photograph is of what simply looks like a black dot.
Author
Worm Researcher Anton
Comments: 0 Posted by: All About Worms Categories: Drain Fly Larvae, Worms Found in the House, Worms Generally