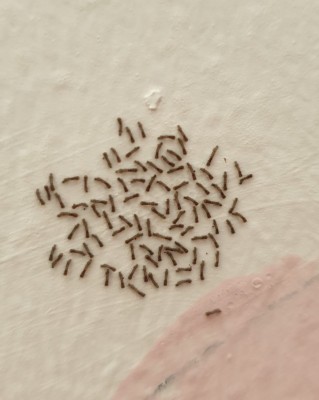 “I found these bugs in my children’s bedroom […] on the WALL. What are these?” asks this reader, who is a mother of two children. The creatures appear to be gray in color, minuscule in size, with bulbous heads and segmented bodies. 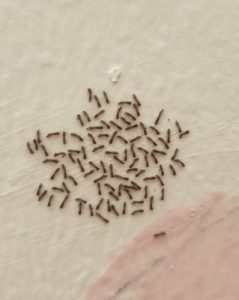 Our reader adds that the “bugs” are “at 10 centimeters on the parquet”, which we suppose means that the worms were not far from the floor where they were situated on the wall. She also states that she worries for her two children, but we can immediately say that she needs not be concerned for them. These bugs are not harmful in any way to humans or animals, and should not be feared. This is because these are White Ermine moth caterpillars. We have received submissions like this before from readers who have found clusters of White Ermine moth larvae on their walls or ceilings. The caterpillars our reader found are newly hatched, as the caterpillars will grow to be much bigger than this as they mature and will develop long black bristles (which we think the tiny spikes on these caterpillars will eventually turn into).

These caterpillars were laid as eggs in our reader’s home by an adult moth (which are white with black polka dots on their wings); this is not an uncommon occurrence, the adult moths being attracted to light like so many other species of moths. Hence, the mother moth likely flew in through an open window or door. If our reader has any worn window screens that need replacing, she might want to look into that as this is often the cause of various bug invasions. It should also be noted that neither the moth, nor the caterpillars are pests; they will not feed on one’s kitchen foods like the pantry moth larva, nor will they feed on one’s clothes like the webbing clothes moth larva. Their diet consists of forest vegetation, so our reader needs not worry about these caterpillars infesting her home for any purpose. For that reason, simply moving the caterpillars outside will suffice in dealing with the problem, and she and her children can sleep easy at night. Of course, it might be worth checking the rest of the home for any more roaming larvae that might have left the group, but they too can simply be moved outside.

In conclusion, the “bugs” our reader found in her children’s bedroom are newly-hatched White Ermine moth larvae and are nothing to worry about. We hope this article is able to put our reader’s mind at ease and we wish her the best!

Article Name
Group of Gray, Spiky Bugs on Bedroom Wall are White Ermine Moth Larvae
Description
"I found these bugs in my children's bedroom [...] on the WALL. What are these?" asks this reader, who is a mother of two children. The creatures appear to be gray in color, minuscule in size, with bulbous heads and segmented bodies.
Author
Worm Researcher Anton
Comments: 0 Posted by: All About Worms Categories: Caterpillars, Interesting Worms, Worms Facts