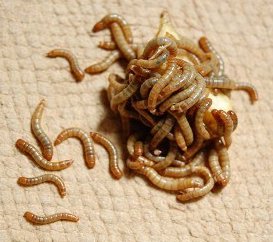 We received an interesting question a while ago about a “gross worm thing.” We were told to direct our attention to the gross worm on the paper towel in the photo, which sounds reasonable, except for the fact that we were given no photo to examine. All we know about the worm is that it is “gross,” about an inch long (2.5 centimeters), and doesn’t have any legs. Obviously, this isn’t much information to work with, but we can say a couple of things about the gross worm, and in doing so we’ll at least limit the range of possible creatures that she found.

We’ll begin by pointing out the obvious fact that what is gross to one person is not necessarily gross to another. Doctors and waste management workers, to make an unlikely pairing, seem to have fairly high tolerances for things that much of the population would regard as gross. It also doesn’t help that the word “gross” has a fairly loose meaning. When a child describes her parents kissing as “gross,” this isn’t gross (even in the eyes of the child) in the same way that, say, week-old roadkill in the Sahara Desert might be gross. (If it is equally gross to the child, and it is gross in the same way, the path to her first romantic relationship might be rockier than most.) While it is obvious to mention that the word “gross” is a relative term, it is a necessary point to make anyway because what is gross in the world of worms is especially subjective. Some people regard all worms, insects, and other bugs as gross simply because they are worms, insects, and bugs. Other people are taken by these tiny creatures – they adore and study them. (How many entomologists think insects are gross?) Perhaps our reader is somewhere in the middle, meaning that in general she doesn’t really mind worms, but happened to find one that struck her as repellent. Of course, we have no idea, and even if she isn’t disgusted by all worms, she still could have found any number of different worms.

While this is true, she at least gave us a couple of characteristics of the creature she came across, and we’ll use these to point out what she didn’t find, giving our reader some minimal direction if she cares to investigate her gross worm any further. If the worm has no legs, it obviously isn’t a millipede or centipede, even though these creatures often disturb people more than the average household pest. She can also rule out a significant percentage of the hundreds of thousands of larvae species that exist. She didn’t find any sort of caterpillar, for instance, and that eliminate about 175,000 possible species from consideration. Unfortunately, she can’t rule out all larvae – not by a long shot – and we actually suspect she probably found some type of larvae because common terrestrial worms (like the various species of earthworm) are generally longer than an inch, and in our experience most people don’t think them especially gross. This is often not the case with something like a maggot, the larval form of Brachyceran flies (like houseflies and blow flies). The same is true of creatures like moth fly larvae, one of the most common pests people find in their homes. These and similar larvae often inspire disgust. To be sure, your average maggot will be shorter than an inch long, but some could reach almost this length, and in any case we aren’t supplying a definite answer to our reader’s question. We’re just indicating the types of creatures she might look into.

So, we have no idea what gross worm our reader found, but we suspect it might not be a worm at all. Rather, it could be some sort of larvae, which for whatever reason people often find more unsettling than worms. Hopefully this points our reader in the right direction.

Article Name
Gross Worms
Description
We received an interesting question a while ago about a "gross worm thing."
Author
All About Worms
Share the knowledge

This many people searched for this info: 2,014