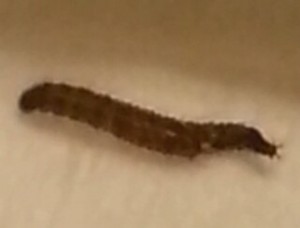 Gray Worms in the Toilet

We received a fairly confusing question from a reader about gray worms in the toilet. Actually, the gray worms (or grey worms if you prefer this spelling) were not in a toilet, but in a “potty,” which we are assuming is a trainer toilet of some variety or another for your children. The reader is hoping she found a “fly larva,” and that no one in the family has any sort of parasitic worm infection, and for this reason she wanted us to identify the gray worm in the toilet.

First, here is an image of the creature that our reader sent in:

You can’t really tell this from the picture, but the larvae is evidently quite small – it’s about a quarter of an inch (or six millimeters) long.

The circumstances in which this creature emerged is disturbing and fairly incomprehensible, as the reader reports that the worms “appeared and started moving after spraying what appeared to be poop ‘splash’ on the inner lid of the potty with ammonia.” Despite our best efforts, we simply do not know how to understand this sentence. There is some sort fundamental breakdown in meaning in its construction – how can something (the worm or a person?) spray a fecal concoction onto the inner lid “with ammonia?” All we can really gather is that worm was found in the toilet, probably after it was used by a child, and that ammonia is in the mix somehow.

The reader mentioned the possibility that she found a fly larva, and this very well could be the case. Moth fly larvae, for instance, are commonly found in toilets, and indeed we have written about moth fly larvae in toilets before. We have even written about moth fly larvae in toilets when a reader was concerned about a parasitic infection, which is the precise concern of our current reader. The creature above doesn’t look exactly like a moth fly larva – their bodies tend to be a little bit lighter in color, and they often have stripes – but perhaps the picture above doesn’t entirely capture what the creature looks like. It could also be another sort of fly larva – there are hundreds of thousands of species in the Diptera order, after all.

Whatever it precisely is, we doubt it is coming from a person, and thus we do not think the reader needs “to deworm the 2yo and possibly [the] entire family.” It is relatively common to find larvae in the toilet, and when a person has a parasitic worm infection, the symptoms generally don’t include finding entire living worms in the toilet. The only worms we can think of that really come out of a person are pinworms and tapeworms (or rather segments of tapeworms), and neither of these creatures looks like what is pictured above. That said, we are not medical doctors, and if the reader has any concern about the health of her child, she should of course go to a doctor. We think she found some sort of fly larva, which isn’t cause for concern, but we aren’t certain of this, especially since we had a lot of difficulty making sense of the reader’s question. Hopefully everything is fine, though, and that finding the larva in the toilet was a one-time occurrence.

Article Name
Gray Worms in the Toilet
Description
We we received a strange and confusing question from a reader about a gray worms in the toilet.
Author
All About Worms
Comments: 0 Posted by: Worm Researcher Evan Categories: Pest Worms