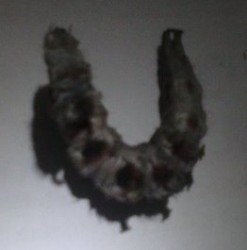 A reader wrote to us through the All About Worms Facebook page about a grayish “worm thing” that she came across. The creature is about 1.5 inches (4 centimeters) long, and it has horns on one end of its body. Interestingly, the creature is also reported to have “holes or suckers” on its bottom side. Overall, the reader describes the creature as “terrifying,” and says that she “would die if it touched me.” She is therefore keen to know what she found and where it came from. What could this gray, horned worm-like thing be?

The reader didn’t directly send us a picture, but she directed us toward a photo that she posted on her own Facebook page:

This creature is a bit strange looking, but our reader might take some comfort in the fact that this is probably just a caterpillar, or the larval form of a moth or butterfly. Perhaps because of our childhood interactions with them, inside and outside of school, people don’t seem to be quite as alarmed by caterpillars, although we’ll leave that judgement to our reader.

Close to 200,000 species have been described in the Lepidoptera order, which moths and butterflies (and therefore caterpillars) make up, so identifying any given species is quite difficult. Moreover, a caterpillar’s appearance can change as it matures, adding another layer of difficulty to identification efforts. The reader didn’t indicate where she found the caterpillar, but she might do some research into local caterpillar species if she is so inclined. Universities often have extension programs that can help with insect and other bug identification, and perhaps there is such a program in our reader’s part of the world.

All that said, the fact that the caterpillar our reader found has suckers on the bottom of its body leads us to wonder if she found a caterpillar in the Limacodidae family, which is made up of moths. Rather than prolegs, the short appendages that are not part of the six thoracic legs that all insects possess, caterpillars in the Limacodidae family have suckers that help them with locomotion. There are still about 1,000 described species in this family, but if we are right to locate the caterpillar in this taxonomic grouping, that certainly narrows the range of possible species our reader might have found.

As for where the caterpillar came from, this is a difficult question to answer because we don’t know where the reader found the creature, and thus we aren’t really sure how to interpret the origin question. If she found it inside, it very likely came from outside, and we doubt it is indicative of any larger problem. Errant caterpillars and other creatures occasionally make their way inside – through an open window, perhaps, or maybe it was attached to something that was brought inside, like a plant. If the creature was found outside, it didn’t specifically “come from” anywhere. It is one manifestation of life in the unfolding evolution of the universe, or something like that.

As we conclude, we should note that in general a caterpillar is nothing to be afraid of. They’re obviously not going to attack a person, and in fact they will probably try to stay as far away from you as possible. However, it is worth keeping in mind that a lot of caterpillars have small hairs on their bodies that can cause skin irritation or rashes, which is why you shouldn’t pick them up with your bare hands. We doubt our reader is very tempted to pick the creature she found up with her bare hands, but this is worth knowing anyway.

Of course, everything we have said has been premised on our caterpillar identification, and we should make clear that we aren’t certain that this is what she found. However, it seems like a promising suggestion given the information we know, and thus it is worth exploring more if the reader’s interest is not sated by this article.

Article Name
Gray
Description
The creature is about 1.5 inches (4 centimeters) long, and it has horns on one end of its body.
Author
All About Worms
Comments: 0 Posted by: Worm Researcher Evan Categories: Caterpillars