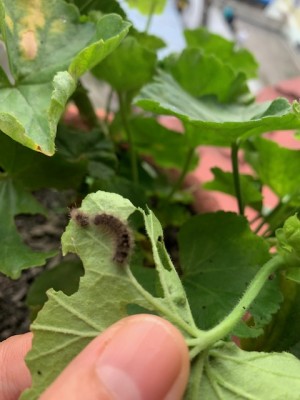 “Who is this guy nibbling my geraniums?” asks this reader, who states she does not “have the heart to evict him and his buddies.” This creature “and his buddies”, as photographed by our reader, appear to have brown, fuzzy bodies, and are perhaps an inch in length, judging from the size comparison to our reader’s fingernail. 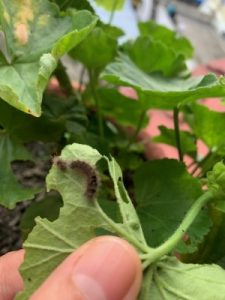 Our reader is from the States, but is currently residing in Nepal, and this question was the second part of a submission in which she also asked about an earthworm which she found in her toilet. It seems our reader has not had the best of luck with keeping her space worm free. Fortunately for our reader, all of the worms she has found thus far are completely harmless, gentle creatures.

The little “guy” who is nibbling on our reader’s geraniums is likely a cream-spot tiger moth caterpillar. If only given the first photo above, our identification would be more confident, but the second photo (see below) threw us off a little. This is because, while the coloration and fuzziness is similar to the caterpillars in the first photo, the way the colors are arranged is different. The caterpillar in the second photo seems to have a wide, light brown stripe going down the middle of its back. In addition to this, the body seems flatter somehow. On one hand, this could simply be a trick of the angle the photo was taken in, it is difficult to tell. On the other hand, this could be a different species of caterpillar. One such caterpillar that fits the physical description of this caterpillar is the fox moth caterpillar. The only disparity is its size. Fox moth caterpillars usually grow to be just below three-inches in length, which is far larger than this caterpillar. Of course, this does not rule out the possibility that the caterpillar is newly hatched and thus a smaller size. 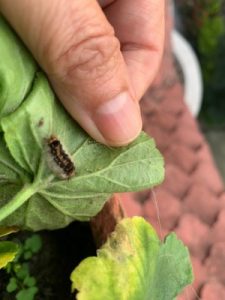 The cream-spot tiger moth caterpillar, while being a rather nondescript brown color, eventually grows up to be a beautiful, multicolored moth with black and white spotted wings, as well as an orange and/or red middle section that is flecked with black spots. They feed on a variety of herbaceous plants (which are plants that have green, rather than wooden stems, that are easy to chew through). Such plants include plantains and dandelions, and can include geraniums, depending on the species. From the photo our reader sent us, it seems as though her geranium plant is of the herbaceous sort.

Our reader will be happy to know that between the two species of moths, none of them have been reported to be especially destructive, nor are they considered pests. Of course, any population can potentially get out of hand and wreak significant damage collectively, but such cases have not been attributed to the cream-spot tiger moth caterpillar or the fox moth caterpillar. This means that our reader does not necessarily need to “evict” the caterpillars if she does not want to.

To conclude, although our identifications of these caterpillars are admittedly not 100% certain, we would say that the caterpillars of each respective photo, at the very least, resemble cream-spot moth and fox moth caterpillars that are either at immature stages of development, or are uncharacteristically tiny. As we are not sure about these identifications, we would appreciate any help and suggestions from readers who think they might know what these caterpillars are. If any our readers do know anything about these critters, they are welcome to submit their ideas in the comments section below.

Article Name
Fuzzy, Brown Creature Nibbling on Geraniums Could Be Cream-spot Tiger Moth & Fox Moth Caterpillars
Description
"Who is this guy nibbling my geraniums?" asks this reader, who states she does not "have the heart to evict him and his buddies." This creature "and his buddies", as photographed by our reader, appear to have brown, fuzzy bodies, and are perhaps an inch in length, judging from the size comparison to our reader's fingernail.
Author
Worm Researcher Anton
Share the knowledge

This many people searched for this info: 789