Furry Moth, Accompanied by Black Larvae, May Be a Moth Fly or a Fall Armyworm Moth

“A few days before” removing black larvae from her living room ceiling, this reader “had seen a rather large, dark, furry moth.” She believes the larvae to be moth fly larvae (otherwise known as drain fly larvae), but wonders if this moth, which was an inch in size and width, was indeed a mother moth fly, or something else entirely.

Now, our reader sent a lot of context, and there is a lot to unpack here, but unfortunately did not send any photographs. Her primary question revolves around whether or not the moth she found was a moth fly or not. She says that she was confused, because while the eggs and larvae resemble that of the moth flies we have discussed on our site, the moth she saw was too big to be an adult moth fly, as her understanding was that “moth flies are rather small.” She is absolutely correct in this. The adult moth fly can reach a mere 5mm (roughly 0.2-inches) in length. However, given that no photographs were sent, we cannot confirm the size our reader estimated of the moth she found, nor can we confirm if it definitely is not a moth fly. That said, even if our reader’s approximation was off, it would still be far too large to be a moth fly. For that reason, we might suggest that while the eggs and larvae are from moth flies, the moth our reader found was unrelated to that situation, and simply flew into her home as many moths tend to do.

But then we started thinking about what else the reader told us. By the time she found the black larvae on her ceiling, a number of them had “dispersed”, and she found “several tiny larvae crawling on the floor and on tables beneath where the eggs had been laid on the ceiling.” Additionally, she states that the moth that she found “had been laying her eggs.” If this is true, then the moth could be entirely unrelated to the larvae on the ceiling. So, then we thought about species of moths that lay eggs on the ceiling, which then hatch into clusters of larvae that can appear black in color. Then it hit us that what our reader may have found are in fact fall armyworms. Our reader can confirm or deny this by comparing the larvae she found to the image below of a fall armyworm cluster one of our other readers found recently. This would add up though. Fall armyworm moths can reach a wingspan of approximately 1.5-inches and a 0.8-inch length. When inside a building, they tend to lay their eggs as a cluster on the walls or ceiling of a given room. It is strange that fall armyworm moths do this, as they are agricultural pests, but nonetheless it does happen. 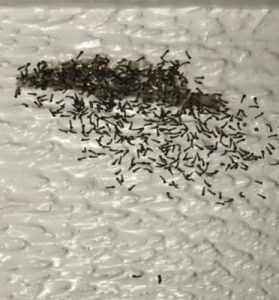 Lastly, our reader reported feeling paranoid because of discovering the larvae everywhere in her home. She asks if they are harmful, and if they “burrow” into skin or ear canals. Whether these larvae are moth fly larvae or fall armyworms, we can assure our reader that they are completely harmless. Neither of these species is parasitic in nature, nor do they possess venom or bite. We hope that this can assure our reader and quell her paranoia. Of course, there is a chance that these larvae are neither of these two species, but there are no parasites we know of that are laid as eggs on the ceiling. Most parasites will hatch inside the host they want to infect. We encourage our reader to send in pictures so we can give her a certain identification, in the case that she does not think these are moth fly larvae or fall armyworms.

To conclude, we cannot say for certain whether the larvae (and moth) our reader found were that of moth flies or fall armyworms. It is difficult to give a concrete answer without photographs of the creatures. That said, if it is either of those two species, our reader has nothing to worry about in terms of her or anyone’s health.

Article Name
Furry Moth, Accompanied by Black Larvae, May Be a Moth Fly or a Fall Armyworm Moth
Description
"A few days before" removing black larvae from her living room ceiling, this reader "had seen a rather large, dark, furry moth." She believes the larvae to be moth fly larvae (otherwise known as drain fly larvae), but wonders if this moth, which was an inch in size and width, was indeed a mother moth fly, or something else entirely.
Author
Worm Researcher Anton
Comments: 0 Posted by: All About Worms Categories: Army Worms, Caterpillars, Drain Fly Larvae