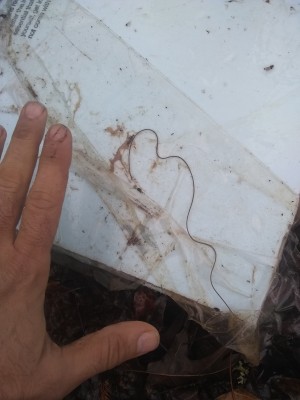 Share the knowledge
We recently heard from a reader in Tennessee. He sent us a picture of a specimen he found in his yard. He wrote, “It moves like a snake but there’s no visible head. It’s about a foot long.” The photograph shows a thin brown worm against a white surface. Since his hand is also in the photo, we have a good idea about the exact size of this creature: 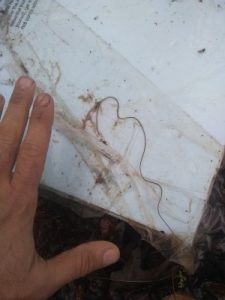 We are confident that our reader has discovered a horsehair worm! Horsehair worms (Phylum Nematomorpha) are known as parasitic worms that infect arthropods such as beetles, crickets, cockroaches, and grasshoppers. However, they are only parasitic as larvae! They are free-living organisms once they reach adulthood.

Immature horsehair worms develop in their host’s body, absorbing nutrients and generally acting as a parasite does. Once the worm has matured, it will wait until its host is in or near a body of water, and then it will eject itself from the body of its host, killing it in the process. This is why horsehair worms are usually found in water, whether that means a pond, lake, cistern, or bucket. Our reader didn’t mention where he found this creature, but we bet it was either in or near some water or on a wet surface (we once heard from a reader who found a horsehair worm on a wet sidewalk.)

Although horsehair larvae are parasitic to some arthropods, they aren’t considered to be dangerous or parasitic towards humans! According to the University of California Cooperative Extension page on Horsehair Worms, even if a human did ingest a horsehair worm, they might experience some mild discomfort but wouldn’t become infected.

In conclusion, a reader asked us to identify the super-thin brown worm he found in his yard. We are confident this creature is a horsehair worm!

Article Name
Foot Long Worm is Probably Horsehair Worm
Description
A reader asked us to identify the super-thin brown worm he found in his yard. We are confident this creature is a horsehair worm!
Author
Dori Franklin
Share the knowledge

This many people searched for this info: 2,986