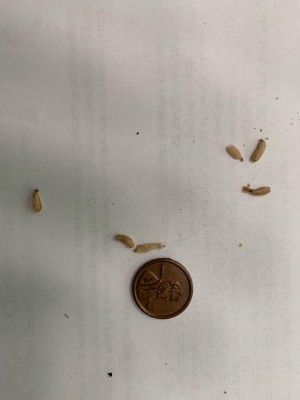 Fly Larvae Infest the Kitchen of this Man in Atlanta, GA

This man in Atlanta, Georgia has been finding a lot of worms in his breakfast nook next to his kitchen. According to our reader, and as seen in the images provided, these worms are 1/4-inch long, tan in color, and with a “brown spot on their top front.” 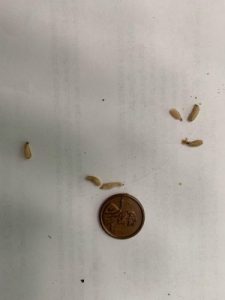 Our reader guesses that these worms are some kind of larvae, but hopes that we can aid in identifying their specific species so that he may understand where they are coming from. He adds that he recently remodeled the house they were found in, and he is unsure whether the worms were already there, or if they might have come with a moving box. Finally, he reports that he “swept up about 40-50” of the larvae and threw them in the garbage can. The six shown in the image are ones he stepped on after having thought he had gotten all of them, hence their squashed appearance.

Well, given the location, appearance and size of these worms, we would attest to that they are indeed larvae, and specifically that they are larvae of the common household fly. More commonly referred to as maggots, these critters are common pests of any home. Fly eggs only take 24 hours to hatch, and a single fly mother can lay up to 1000 eggs in her lifetime, meaning that if one does not take immediate action in ridding one’s home of these maggots, they can multiply in numbers fast. Now, a house fly larva’s only goal is to eat as much food as they can before they enter the stage of pupating, which begins only five days after they hatch!

Fly larvae feed on decomposing organic matter, such as compost, faecal matter, dead plants and decaying corpses. For this reason, we definitely do not recommend throwing these larvae in the garbage, especially if any food or other organic matter has been deposited in the same place. Otherwise, the maggots can simply continue to maturate and then breed to lay more eggs and spawn more larvae in one’s home! We encourage our reader to simply move the larvae outside. In order to prevent the return of fly larvae, it is important to keep up with housekeeping. Cleaning one’s kitchen often, as well as making sure not to leave out any uncovered food, and throwing away dead plants will ensure that one’s home is not attracting flies. Furthermore, making sure that any cracks in walls or flooring, as well as splits in window screens, are sealed is an idea worth considering as it will prevent the entrance of any other unwelcome guests.

Finally, it is important to wash or throw away any food that the flies may have gotten to. Not only is it unsanitary to eat food that a fly may have landed on, as there may be faecal matter or vomit leftover on the food, but flies may have already laid eggs in the food they landed on. As flies can potentially carry pathogens harmful to a human’s health, one will not want to be digesting these critters, and these eggs can be difficult to spot with the naked eye, and oftentimes resemble grains of rice.

In conclusion, the worms our reader found in his kitchen were house fly larvae. These common pests can prove to be quite the nuisance, and can even be harmful toward human health. Yet, throwing the larvae in the garbage is neither a simple nor a preferable fix to the problem. Throwing the larvae outside, keeping up with consistent housekeeping, as well as appropriate food-storing are all viable measures for dealing with a fly infestation.

Article Name
Fly Larvae Infest the Kitchen of this Man in Atlanta, GA
Description
This man in Atlanta, Georgia has been finding a lot of worms in his breakfast nook next to his kitchen. According to our reader, and as seen in the images provided, these worms are 1/4-inch long, tan in color, and with a "brown spot on their top front."
Author
Worm Researcher Anton
Comments: 0 Posted by: Worm Researcher Anton Categories: Composting Worms, Pest Worms, Worms Found in the House