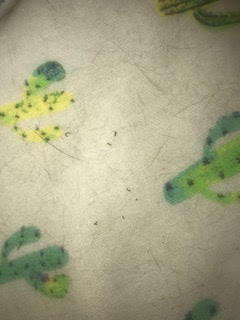 ‘Little black debris’ has been found on the fur of this reader’s cat after brushing, and subsequently, tiny organisms were found in her cat’s bed, as well as on a chair the cat likes to sit on. Our reader has attached photographs of one of the organisms, a far-off shot of the aforementioned black debris, as well as a photo of another organism that looks entirely different from the first. 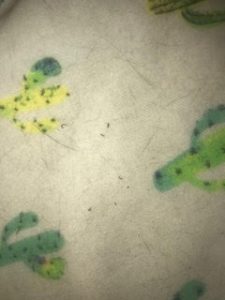 Firstly, our reader provided three excellent images. The first of which (see photograph below) shows a worm-like creature with transparent skin and a long strip of black on its inside. The second photo (see image above) is of the black debris our reader found on her cat, where we can see little oval shapes and C-formed shapes of black matter. The third and final photo (see below) shows us a detailed close-up of an organism that looks very different from the first. It appears to be black/gray and white, with segmentation and a pair of antennae on its head. 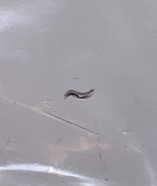 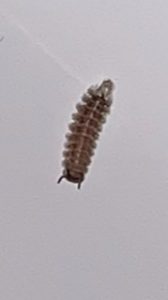 Secondly, our reader gave a great deal of context as well, which is much appreciated. Our reader, who is based in New York State, states that she is not sure if the organism in the first image is a worm, parasite, bug or larva, not that any of these identifications are mutually exclusive from one another. Furthermore, she is not sure if the organism in the third photo is a different organism altogether, or the same organism at a different stage of development. In terms of the black debris, she refers to them, in the context of describing the second photo, as the ‘dried up or dead’ bodies of the organism in the first photo, and when the debris fell off the fur of her cat, it would leave spots of blood if wet. Additionally, none of the live organisms were found on the cat, but only the debris, and the cat has had no marks left on her, nor any symptoms, and her stool is free of these organisms. Moreover, our reader emailed her vet with these pictures and they replied with, “we have no idea what that is but its not a regular parasite for pets. This is not covered by medications and if there are more of them maybe call an exterminator.”

Hence, now comes the question of what these creatures are? If only provided the first photograph of the transparent creature with the dark entrails, we would confidently identify these as flea larvae. However, if only given the last image of the black and white, segmented worm, we would suppose these were carpet beetle larvae. To have evidence of both is odd, to say the least, but either one would make sense to some degree.

Fleas are common exterior parasites of domestic pets, such as cats and dogs. They suck out the blood of their hosts by first clinging onto their fur before attaching themselves to the skin to feed. In this case, the black debris would be ‘flea dirt’, which is flea excrement, and a common symptom of having fleas. This would explain where the larvae were found, as flea eggs are often laid on places where the host pet often lies down, such as cat beds, or the chair our reader mentioned.

Carpet beetles, on the other hand, are not parasites, but are clothes-eating insects. Their larvae are usually bristly in appearance, and are striped and segmented. They usually appear black and white, or brown and tan. Sometimes they have been known to have two, long bristly tails (as in the case of the black carpet beetle larva) or antennae, such as in the case of the organism in the third photo. In fact, it is the larvae of carpet beetles that do the most damage in the home, and while they typically feed on clothing, carpets and upholstery, they have been known to feed on human hair and animal fur. Thus, with this explanation, we would propose that the black debris are either the ‘dried up or dead’ bodies of carpet beetle larvae, or the faecal pellets that they often leave in their wake. Hence, what our reader mistakes for blood when the debris makes contact with water could just be carpet beetle faeces.

Ultimately, we would suggest that our reader has found both fleas and carpet beetle larvae in her home, though it is certainly the fleas that are infesting her cat, and the appearance of the carpet beetle larva is unrelated. Regardless, the treatment for an infestation of either species is similar. Vacuuming up and laundering/steam-washing the spaces and fabrics where infestations of either organism would typically occur is essential to eradicating the infestation. Furthermore, both fleas and carpet beetles will have their larvae hiding between the folds of clothing, on mattresses, under furniture, or in other small, dark spaces. Finding the source and cleaning it out is also essential to the control of the infestation. If our reader wishes to read more about either creature and learn specific information about them, she may feel free to read any or both of the following two articles we have written that cover these topics.

To conclude, the organisms our reader found in her home are both flea larvae and carpet beetle larvae. The black debris is most definitely flea dirt, the larvae found on the cat’s bed and chair are flea larvae (as shown in the first image), and the creature in the last image is a carpet beetle larva. We urge our reader to take her cat to the vet with this identification in mind, as a vet should be able to provide treatment for fleas. While carpet beetles will not cause any harm to our reader’s cat, she will nonetheless want to take care of this infestation using the methods listed above. If she does, we are sure that our reader’s home and cat can be free of fleas and carpet beetles in no time.

Article Name
Fleas and Carpet Beetles Infest Woman's Home and Cat
Description
'Little black debris' has been found on the fur of this reader's cat after brushing, and subsequently, tiny organisms were found in her cat's bed, as well as on a chair the cat likes to sit on. Our reader has attached photographs of one of the organisms, a far-off shot of the aforementioned black debris, as well as a photo of another organism that looks entirely different from the first.
Author
Worm Researcher Anton
Comments: 0 Posted by: All About Worms Categories: Carpet Beetle Larvae, Pest Worms, Worms Found in the House