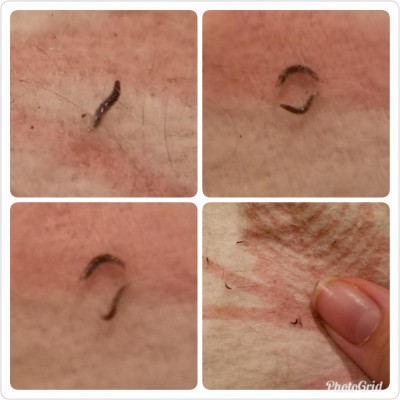 We recently heard from a reader about some worm-like organisms he found on a bed that his cat hangs out on. He said, “I am relatively sure that what I’ve found is flea larvae but I’d just feel more comfortable with some kind of back up opinion. I have started to wash all the bedding and have done some intensive rounds of vacuuming in the meantime.” This is the photograph he sent us: 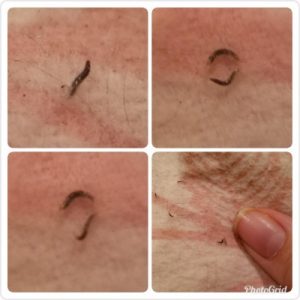 He explained, “these pictures were taken on a bed where our cat hangs out on sometimes and was recently treated for fleas. Many of them appear to be dead. I didn’t have a coin handy to use as a size reference but I used my thumb in one of the photographs.” The creatures have mostly black bodies with some translucent areas near the anterior and posterior ends.
We agree with our reader, we believe that these are flea larvae! Since our reader has already brought his cat to the vet to be treated for fleas, he has completed the first step of dealing with this issue. He also mentioned he has already started washing the bedding and doing some vacuuming. In addition to the bedding on the bed where the larvae were discovered, he should wash the bedding and blankets on any bed or couch that his cat sleeps on. He should also wash any cat toys, and consider throwing out the ones that cannot be washed. He should continue to sweep, mop, and vacuum the floors often, and should throw out the vacuum bags after each use because flea larvae can pupate and hatch in the vacuum bag. He should stay on top of the cleaning regime for several weeks, until he is confident that there are no more fleas or flea larvae in his home.
To wrap up, a reader found small black organisms on a bed where his cat sleeps. We are confident that these creatures are flea larvae.