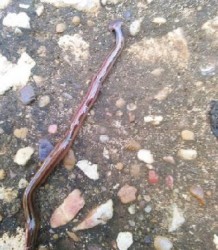 First, here is the picture the reader submitted along with her question:

It is little hard to see, but you’ll notice that the worm’s head is flattened and is shaped kind of like a hammerhead. This distinct body feature, coupled with the creature’s long striped body, indicates that she found a hammerhead worm. There are several different species of hammerheads, and together they make up the genus Bipalium. This genus is part of the land planarians family (i.e., family Geoplanidae), which is part of the phylum Platyhelminthes – the flatworms. Overall, then, hammerhead worms are terrestrial flatworms.

Unfortunately, the matter of fishing with flatworms appears to be under-explored. We were able to find basically no information on this topic, which is a little surprisingly since there is a lot written about other worms and larvae being used as fish bait. This by itself implies that hammerhead worms are not widely used for fishing. If they were, more would be written on the subject, presumably. This is especially true since hammerhead worms are quite pervasive, and in some places problematically so. Several are considered invasive species in the United States, and they are capable of depleting earthworm populations since earthworms are their main (and possibly exclusive, at least in some places) food source. Thus, people find them fairly often – we have answered many reader questions about them ourselves – so if they were a good fish bait, this seems like something that would be documented.

However, the absence of information about hammerhead worms as potential fish bait doesn’t necessarily imply they won’t make good bait – what is true can go unsaid – but there are other, more positive reasons for thinking they won’t make good fish bait. First, hammerhead worms lack natural predators, and this is one reason why they are disturbing ecosystems as invasive species in several parts of the globe. Because of their unpleasant and potentially even toxic body secretions, animals don’t feed on them with any regularity. Since they live on land, we mean that terrestrial animals don’t feed on them, but aquatic animals might find them distasteful as well. We also read on a fishing forum that hammerhead worms don’t have a particularly good body texture for fishing. For one thing, their bodies are generally flat and thin – they are acoelomates, which means they have no body cavity – and apparently they break apart easily when being handled, potentially because they try to escape. And regardless, flatworms are structurally different from the types of worms that are generally used for fishing, like earthworms, which are in an entirely different phylum (Annelida) than flatworms.

At bottom, we aren’t sure that hammerhead worms can’t be used as fish bait, but at least a few different factors suggest they might not be well suited to this end. If anyone has had any experience fishing with hammerhead worms, we’d be curious to know how it went, and if our reader tried with the worm she found, she should feel free to send us any updates as well.

Article Name
Fishing with Hammerhead Worms
Description
We recently received a question from a reader about whether or not it is possible to fish with hammerhead worms.
Author
All About Worms
Comments: 0 Posted by: Worm Researcher Evan Categories: Flatworm, Hammerhead Worm