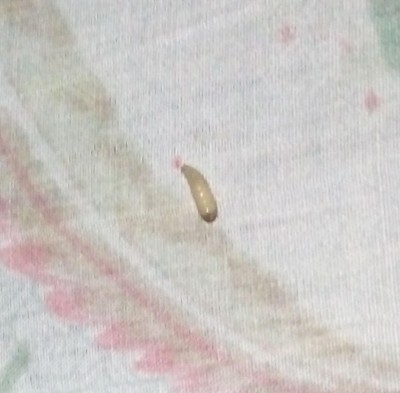 A reader recently sent in this image of a cluster of worms she found on her bed. In the words of our reader, the worms appear to be short, fat and white. 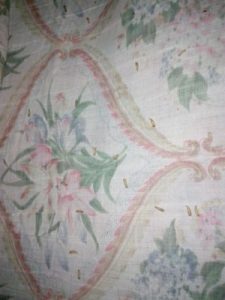 Our reader asks us to identify the creatures, as she finds their appearance unsettling. In addition to this, she presumes that this is the kind of worm that usually comes from dead animals. We think she is referring to maggots, which are fly larvae, and whose diet consists of food waste, decaying organic matter, and yes, the flesh of dead animals. On one hand, the creatures in this photograph do resemble maggots, but on the other hand, a worm of this size and color is as about as generic of a worm you can find. These worms resemble many creatures: maggots, grubs, and moth larvae. Hence, even upon zooming in on the worms (see the image below), the worm still could be any of those three species. 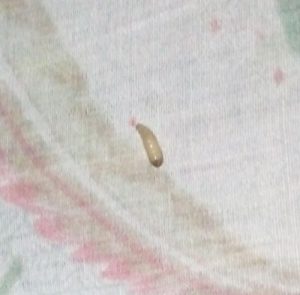 Now, it is a question of narrowing it down to one species to provide our reader with the best possible advice. So, if the appearance does not give away the creature, then what will? One important factor that can often identify a larva is the location where it was found. Additionally, if one considers the diets of the three aforementioned creatures in conjunction with the location that the larva was found, one can usually make an educated guess as to what the creature is.

Maggots tend to be found near sources of organic matter, as that is their primary source of food, so we can rule out that option. Grubs are usually found in the garden, and whilst it is not unheard of to find them inside, they would most likely only end up inside by mistake, and thus it is unlikely that such a large number of them congregated in the same space inside. This leaves the moth larvae. Given that the most common moth to find in the household is the clothes moth, which feeds on fabrics and textiles, and these larvae were found on a bed, we would conclude that these creatures are clothes moth larvae, specifically a ‘webbing clothes moth larvae’.

Webbing clothes moth larvae are one of the two most common clothes moths found in households. Their diet consists of fabrics, and specifically animal fibers. They will not eat synthetic materials unless mixed with animal textiles, according to the University of Kentucky’s Entomology department. Furthermore, the larvae of these moths tend to be a cream color and can reach half of an inch in length, thus matching the appearance of the worms in the photo our reader sent in. However, on most photographs found on the internet, webbing clothes moth larvae are thinner than the worms on this photograph, so it is important to note that we cannot be 100% confident in our answer. But in that sense, there is always room for doubt in identifying insects. And new species are discovered all the time!

What is interesting about webbing clothes moth larvae is the span of time they spend in their larval stage. Depending on factors such as their proximity to a food source and climate, webbing clothes moth larvae can take anywhere between one month and two years to move on to their pupal stage, when they form their cocoon to undergo metamorphosis. In the wake of a webbing clothes moth infestation, one will often find tubes of silken material that they spin, patches of webbing, or droppings. In the image below, we have circled three spots next to some of the larvae that could be either of the three things (most likely one of the latter two, given the size). However, given the quality of the image, it is difficult to tell what those are, as they could be something else entirely that is unrelated to the presence of the larvae. But these spots are found in many areas across the image near the larvae. 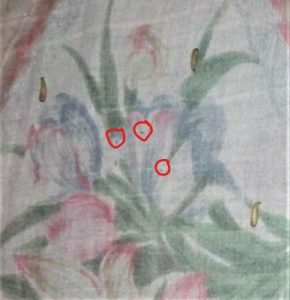 In order to get rid of the larvae, the first step to take is locating their source. Places they typically reside are dark, cramped spaces where they cannot be found easily, and where animal textiles are available. For example, in the back of a wardrobe, or on a piece of clothing that has hung in a closet for a long time without being used. Secondly, vacuum up all visible larvae and eggs, and thirdly, launder all infested materials in extremely hot water to kill off any surviving organisms. To prevent future infestations, our reader will want to launder any pieces of clothing, or other fabrics, that will not be used for a long period of time before hanging them up. Additionally, cold vaults can be purchased to store prized pieces that one does not want ruined. Even more methods of dealing with and preventing clothes moth infestations can be found at the same website linked above.

To conclude, although we cannot be completely sure, the worms that our reader found on her bed are most likely webbing clothes moth larvae. Regardless, the advice provided on how to handle them is generally helpful advice when dealing with any infestation of critters that reside on or eat fabrics.

Article Name
Fat White Worms on Fabric are Webbing Clothes Moth Larvae
Description
A reader recently sent in this image of a cluster of worms she found on her bed. In the words of our reader, the worms appear to be short, fat and white.
Author
Worm Researcher Anton
Comments: 0 Posted by: All About Worms Categories: Case Bearing Larva, Pest Worms, Worms Found in the House