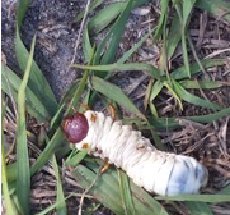 A reader wrote to us recently to inquire about some gross “things” she found in her yard. The things might more precisely be described as fat and white with brown heads, and the reader was wondering if she found some sort of worm or larvae. We are basically certain she found grubs, which are also called “lawn grubs” or “grub worms” (even though they are larvae), and below we provide a little more information about these creatures. The reader also mentioned that she is concerned about the “dangers they may pose for humans and pets,” so we’ll address this matter as well.

We are confident our reader found a grub because the picture she sent us looks exactly like a grub:

The image we were sent was quite small, so we had to magnify it slightly to fit with the page’s formatting, and hence the slight blurriness of the image, but overall it is easy enough to see. We have written about grubs on multiple occasions, and the creature in the image above almost exactly matches the creatures in the images contained in our article about grub worms in a mulch pile on the lawn.

Although we are confident our reader found grubs, it is worth mentioning that the word “grub” is fairly vague. Some people use it to refer to the larval form of any beetle, but even if we restrict the term only to the larval form of scarab beetles, as many do and as we do in the present case, this still leaves us with tens of thousands of different species to sort through. This may not be of concern to our reader, as a lawn grub identification might be all the specificity she is looking for, but we figured it was worth mentioning. If she wants to determine the precise species she found, she would have to study its anatomy, and research the types of species in her region of Florida (Plant City). Universities often have extension programs for local communities that can help with bug identification – for instance, we found a good guide to grubs compiled by the University of Florida that lists some Florida species – so she might look into these resources if she really wants to dig into the details.

As for whether grubs present a threat to humans or pets, the answer is basically no, although we hesitate to make definitive statements about anything relating to health and safety. In basically all cases, people are concerned about grubs because of the damage they can inflict on lawns – they aren’t really perceived as a threat to humans or pets. Moreover, we have written about dogs eating grubs, and this too doesn’t appear to be harmful (indeed, in other parts of the world, people eat grubs with some regularity). However, the reader reported the grubs she found have pinchers, so we suppose they might be able to pinch a pet or family member, although we don’t necessarily think this is something to be overly concerned about. Whatever body part of the grub might be able to inflict any sort of minor harm on a human or pet is not designed to inflict pain – they are there to help the grub eat the roots of grass and other plants, which is why they are a threat to lawn health. So, again, we don’t want to declare them completely safe because we don’t know what the reader’s precise species of grub is capable of, but as a general rule they should not be perceived as a threat to human and pet safety.

So, to recap, we think our reader found lawn grubs, although we don’t know exactly what species. And regardless of the species, they shouldn’t present much of a threat (or any threat) to people and pets.

Article Name
Fat, White Larvae with Brown Heads in Lawn
Description
We are basically certain our reader found grubs, which are also called "lawn grubs" or "grub worms" (even though they are larvae).
Author
All About Worms
Comments: 0 Posted by: Worm Researcher Evan Categories: Grub Worms