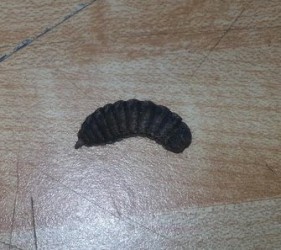 A reader wrote to us recently about some plump black larvae he has been finding in his RV after a water leak. At first he only found the larvae under his trashcan, but he has since spotted them in other parts of his RV – “on the bathroom floor and the carpet and around the seams where carpet stops.” We are pretty certain our reader is finding black soldier fly larvae, but that only addresses the first of his three questions. He is also wondering why the larvae are in his RV, and also how to get rid of them.

First, here is the picture the reader sent along with his question:

We are confident this is a black solider fly larva, which is also called a “Phoenix Worm” or can be abbreviated as BSFL, because this is exactly what it looks like. We have written about these small black “worms” (or brown “worms”) several times before, and our reader should check out some of these articles to learn more about the larvae, as well as the adult black soldier fly. Several of these articles also include reader-submitted pictures of BSFL, and he’ll immediately see why we think this is what he found. These larvae are generally used as animal feed or are part of composting operations, but they occasionally come up in other contexts. One reader found the larvae in his toilet – actually, two readers have found the larvae in the toilet – and they have also been found around readers’ houses, like in the cupboard. In fact, we have received a question from a person who probably found black soldier fly larvae in his RV, so we’ll now turn our attention to our reader’s exact situation, using this older article as a helpful case study.

As we pointed out in this previous article, BSFL are drawn to accumulations of decaying organic matter, which is why people use them in compost bins. Compost heaps need to be moist, and we are wondering if the reader’s water leak created an environment, however small, that was kind of like a compost bin or its naturally occurring counterpart (a heap of decaying matter). Obviously, we have no idea what our reader’s RV looks like, and if there are any places where things like small pieces of food might accumulate. It is perhaps telling that the larvae first emerged under the trashcan, and maybe the larvae are being drawn to the contents that lie within. In any case, it seems likely that the reader’s RV was made hospitable to BSFL after the water leak, but it is difficult to say exactly how it has been made hospitable.

Assuming this is true, the obvious task at hand is making the RV inhospitable to BSFL, which we presume is largely a matter of cleaning and potentially further drying. We have no idea how severe or long-lasting the water leak was, but it might take a while for moisture levels to return to normal. Our reader should also be mindful of nooks and crannies in the RV where matter might have accumulated. Black soldier eggs are often deposited in small cracks in or around decaying matter, so a small pocket of, say, food scraps that were inadvertently swept into a corner might make a perfect breeding ground for BSFL, especially after it is wet. It is important to clean as thoroughly as possible to get rid of whatever it is that drew the larvae in the first place.

A couple of further notes as we conclude. First, an RV is in general not the type of place BSFL want to live. There isn’t enough food around, and it is too dry. So, it is possible our reader is dealing with a temporary infusion of BSFL that will quickly die off once conditions in the RV return to normal. Black soldier fly eggs take about four days to hatch and then the larvae will emerge, and the reader said he first noticed the larvae about a week after the water leak, so he is still within the window of time that would cover an initial population being born and maturing as larvae (in a few weeks, if nothing were done, the adult flies would start to emerge). Obviously, our reader should still try to remove the BSFL and not let them run their natural course, and it is still worth keeping in mind that the larvae don’t really want, as it were, to be in a normal, clean RV. Also, it is worth noting that BSFL are not harmful, and nor are the adult flies. Their presence in the RV is no doubt annoying, and the issue should be taken care of, but they won’t cause any direct harm to the reader.

We hope our reader is able to get rid of the black soldier fly larvae quickly and easily.

Article Name
Fat Black Larvae in RV
Description
A reader wrote to us recently about some plump black larvae he has been finding in his RV after a water leak.
Author
All About Worms
Comments: 5 Posted by: Worm Researcher Evan Categories: Pest Worms