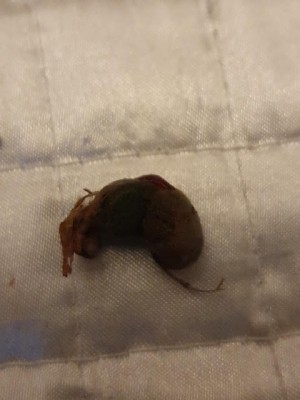 A fat, black “worm/larvae-looking thing” was found on this woman’s bed in Yorkshire, UK. Near this one-inch worm, our reader discovered a small amount of dried red liquid, which our reader speculates could be blood. 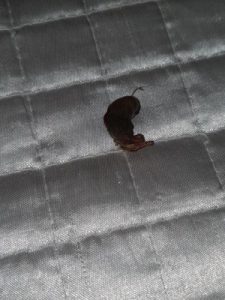 Together with the images provided, our reader graciously provided a decent amount of context as well. She states that she has a cat, and she thought the worm may be some type of parasite, but that it does not resemble any of the parasites they looked up. She follows this with her initialism assumption, that the worm was a black soldier fly larva (BSFL), but that the presence of blood made her doubt this possibility. At first, we too thought it was a BSFL, yet the lack of defined segmentation refuted that, and the small round, eye-looking thing on one of its ends (see images below; one provided by our reader, and the other courtesy of the department of entomology at Iowa State University). It was actually this part of the worm that led us to its true identity. The worm we are looking at here is a bot fly larva. The bot fly is also known as botfly, with bot flies also known as botflies. 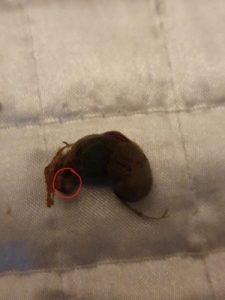 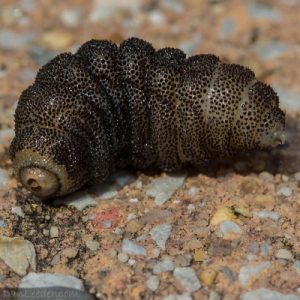 Bot fly larvae (or, Cuterebra) are small, maggot-like parasites who burrow into the skin of mammals and travel through muscle and tissue to undergo maturation. Normally, they target rabbits and other rodents, but are commonly found in cats and dogs as well. The adult bot fly will lay its eggs near a burrow, so that when the mammal that resides there steps in the eggs, they will cling to their fur, after which the larvae can hatch and have easy access to the animal’s body. According to The MSPCA Angell, dogs and cats commonly contract them when they stick their heads in the burrows of these animals, and thus they are commonly found on their faces or necks. After a certain period of time, bot fly larvae that have resided in a mammal’s tissue will exit the body, to finish its process of maturation on the ground.

In the case of our reader, it is possible her cat was a host to a bot fly larva, which then exited the cat’s body when it was lying on our reader’s bed. This would also explain the presence of blood as the cat would be left with a wound when the larva exited its body. We should add that there are cases of bot fly larvae choosing humans as their hosts, but that is far less likely. In any case, we urge our reader to take her cat to a veterinarian as soon as possible so that her cat may receive an accurate diagnosis and proper treatment; left untreated botflies in cats can be fatal. We also advise that our reader herself consults a medical professional for the same thing, in the worst case scenario that she has been host to bot fly larvae, and just to ensure that both her and her cat are healthy. As far as our sources tell us, bot fly larvae do not move from one host to another, and are not contagious, so warning others who do not live in our reader’s household is probably not necessary.

To conclude, the one-inch, fat, black larva our reader found on her bed was that of the bot fly. It is unfortunate that our reader found a parasite in her home, as they are never welcome guests (we would like to assume), but with proper treatment, neither our reader nor her cat should sustain any long term injuries.

Article Name
Fat, Black Larva on Bed is a Bot Fly (Botfly) Larva
Description
A fat, black "worm/larvae-looking thing" was found on this woman's bed in Yorkshire, UK. Near this one-inch worm, our reader discovered a small amount of dried red liquid, which our reader speculates could be blood.
Author
Worm Researcher Anton
Share the knowledge

This many people searched for this info: 1,549