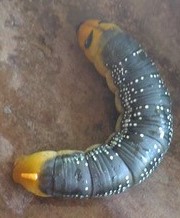 It is, however, a very handsome caterpillar. Seriously, this guy (or gal) could be a caterpillar super model. Actually, for all we know, it is!

We’re assuming that, in addition to wanting to know what this critter is not, she might like to know what it is. Luckily, there are some pretty clear clues in her photograph.

The first is the horn on the caterpillar’s rear end, which is on the bottom left of the photograph. Not all caterpillars have horns, so this narrows down the choices considerably. In addition, this caterpillar does not appear to be hairy at all, and had little white dots on it.

We believe that our reader has encountered a white-lined sphinx (Hyles lineata) caterpillar. From the family Sphingidae, white-lined sphinx caterpillars are commonly found munching on grapes, apples, tomatoes, and many other things. If she has found this critter near any of those plants, then this would confirm our identification. They can be found with black bodies with orange or yellow highlight, but are highly variable in color, as shown in the photos below. 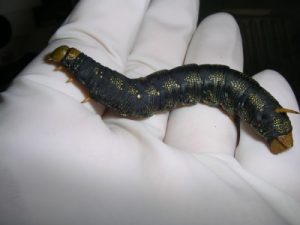 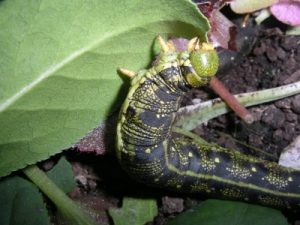 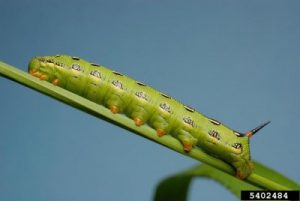 We’ve written in other articles why it can be so difficult to identify caterpillars. In short, it is because the same species may look very different depending on which instar (or stage) it is in. Since we do not know what instar this particular fellow is in, it’s a bit difficult to positively ID him.

Given its horn, we can be quite sure that this is a caterpillar from the Sphingidae family.  Sphingidae caterpillars tend to be specific feeders, and so if we knew what plant she found this critter on then we could be more certain in our identification.

If she has more than one of these critters in her yard and garden, and would like them to not be there, then we recommend that she simply pick them up and move them to another location. This will not harm her or the caterpillar.

Article Name
Fat Black Caterpillar is a White-line Sphinx Caterpillar
Description
Today, we are going to address a question given to us by a female reader who would like to know if the animal in the fantastic photograph below is a worm. The answer is, “No, the animal in the photograph is not a worm.”
Author
Alexis Rodriguez-Carlson
Comments: 0 Posted by: Previous Author Categories: Garden Worms