A couple of weeks back, we received a question from a reader about some very small worms (actually, “very” perhaps isn’t quite strong enough of a word – they are more like extremely small worms) that were found on her bathroom wall near the ceiling. The reader sent us two pictures of the extremely small worms, which are probably not worms at all, but rather some type of larvae. Even by larvae standards, these larvae (if they are larvae) are very small. The reader only wanted to know what these little creatures are (worms? larvae? something else?), which is a modest inquiry, but a difficult one just the same.

Here is the first picture sent in by the reader: 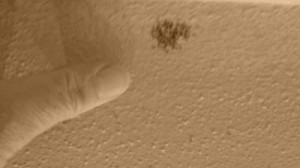 Obviously, this isn’t the clearest picture, but thanks to the inclusion of the reader’s thumb, it is easy to see that these creatures are in fact very small. We can’t be exactly sure (in part because we aren’t sure how big our reader’s thumb is), but they look to be only about one to two millimeters (a little less than a tenth of an inch) in length.

The reader also submitted this picture, which shows the creatures more clearly: 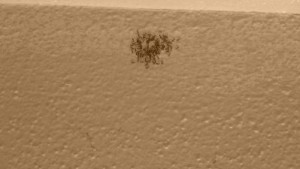 Any time we receive questions about small “worms” that are found in a reader’s bathroom (which happens a lot), our first guess is that the reader found moth fly larvae (i.e., the immature form of the moth fly). These are very common, and they are frequently found in bathrooms because of the moist areas in this part of the house.

This is our default guess based on the facts we are confronted with, but we have some reservations about this suggestion in the present case. First, the creature pictured above is, as we’ve said multiple times, extremely small, smaller than your average moth fly larva, which tend to be around a quarter of an inch in length (about eight millimeters). Moth fly larvae can be as short as an eighth of an inch (about four millimeters), but even this seems a little larger than the creature pictured above. Also, moth fly larvae tend to live in moist places themselves (as opposed to being found in the area of moist places, as is the case with the adult form). For example, you might find moth fly larvae in drains or toilet bowls because this is where the moisture is, and you generally wouldn’t find them on the wall of the bathroom. On the other hand, it’s possible to find the larvae in places that are merely around wet areas, and moreover moth fly larvae tend to be a brownish color, just like the creatures in the picture above.

So, our best guess is that our reader found moth fly larvae – and there are at least a couple of reasons for thinking this – but in truth we are not very confident in this suggestion; we do think, however, that the reader probably found some type of larvae. Alas, we simply have no other specific suggestions to offer. So, readers of the article, please post a comment below if you have any guesses as to what this creature might be.