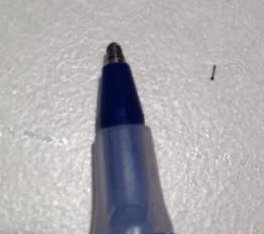 As you can see, the larva above is extremely small – it looks tiny even relative to the tip of the pen in the photo. It is hard to see, but if you look really closely, it appears that larvae has a black head that is facing downward, and the rest of its body is a lighter color.

Regardless of what these creatures are, we are fairly certain they are the exact same creatures that three other readers have written to us about, as described in the following articles:

The different language in each title reflects the wording of the questions we received, so although we talk about both larvae and “worms,” as well as white and dark bodies, these are all articles about very small larvae with black heads and lighter-colored bodies. In all of these articles, we speculated that our readers found moth fly larvae or Indian Mealmoth larvae because these seem to be the most likely possibilities.

Article Name
Extremely Small White Larvae with Black Heads
Description
A reader found a "few dozen" white-bodied, black-headed larvae in her bathroom; they were in a damp towel that was on the edge of the bathtub.
Author
All About Worms
Share the knowledge

This many people searched for this info: 9,846