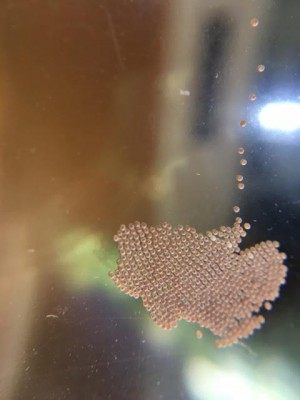 Eggs and Larvae on Window

We just received some fantastic photographs from one of our readers. She found several hundred tan eggs on her window. They eggs darkened, and then hatched into larvae. The pictures she sent us are a great sequence displaying this process. Our reader is curious what kind of creatures these are. Here are the photos: 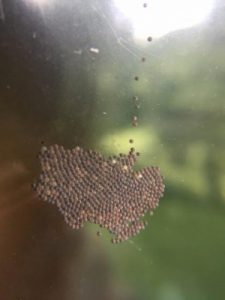 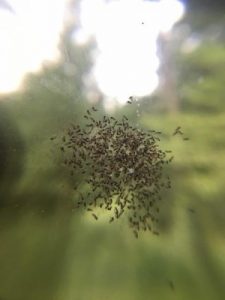 The eggs are very small, circular, and tan colored. The larvae are also quite tiny, have black heads, and dark colored bodies. We are confident that these are some type of larvae, but we aren’t entirely sure what kind of larvae. We think they are probably moth fly larvae. We have written about moth fly larvae appearing in large groups on walls before. These small larvae feed on decaying matter, and sometimes appear in large groups where other bugs have been killed. Adult moths lay their eggs on whatever their larvae will eat, so that when they hatch they can just start eating. So, if another bug was killed against the window, its remains could be serving as a food source for these larvae.  For example, maybe our reader swatted another bug against the window where these eggs and larvae appeared.

There are a few things we don’t know about the situation. These clues might be helpful in coming up with a more solid identification, or explanation for the presence of these worm-like organisms on the window. For example, how much time passed between the first photograph showing the tan eggs and the third photograph showing the larvae. Also, was this on the inside of the window or on the outside? We think probably the inside because you can see a green background that looks like it might be trees outside.

To conclude, a reader discovered some eggs and subsequent larvae on her window. We believe these are probably moth fly larvae. We recommend she clean her window to get rid of whatever potential food source is on it!

Article Name
Eggs and Larvae on Window
Description
A reader discovered some eggs and subsequent larvae on her window. We believe these are probably moth fly larvae.
Author
Dori Franklin
Comments: 2 Posted by: Worm Researcher Dori Categories: Worms Found in the House