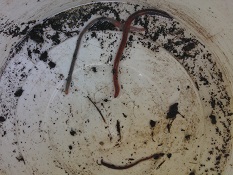 A reader recently sent us a photo of three worms she found. Two of the worms are large, at least relative to the third worm, which is fairly small. The reader notes that one of the worms is “mature with clittelum,” and also notes that it is dark red. This appears to be so, and it seems that at least one of the other worms has a clittum too. (Thus, we are dealing with clitella, the latinate plural form of clitellum, even though people often write “clitellums,” and hence the addition of this word in the title of this article.) The reader asked us to identify the three worms, which she submitted a picture of, and we have a ready and simple answer: all three seem to be earthworms. We think they are earthworms because they look like earthworms, and the fact that at least two have a visible clitellum lends further credence to this suggestion.

First, here is the picture our reader submitted:

The image is a bit small, but you can at least clearly see three worms in the picture. For whatever reason, it is the small worm at the bottom of the photo that the reader singles out. This is the one that the reader says is mature, dark red, and in possession of a clitellum. Perhaps this is so, but it is hard to see these features of the worm in the photo, even when it is magnified. The worm in the top of the image to the left has the clearest clitellum, at least to our eyes. (In case you are wondering, a clitellum is the bump or band around the middle of earthworms.)

Given that the reader pointed out the worm’s clitellum and connected this to the creature’s maturity, we aren’t sure why the reader asked us for help identifying these creatures. “Clitellum” isn’t exactly a household word, and we presume that the average person doesn’t know that when a worm matures, its clitellum becomes more visible. If she knows all this, she might know that only earthworms and leeches are clitellates (i.e., are in possession a clitellum and therefore belong to the Clitellata class), and the picture above clearly seems to be some sort of earthworm and not a leech. We therefore wonder if answering our reader’s identification question with “earthworms” is sufficient.

However, if she is looking for an exact species of earthworm, we unfortunately are unable to say. There are thousands of species of earthworms – they are one of the common creatures of the Oligochaeta class – and the differences between species can be extremely minute. Thus, we are unable to simply look at a picture of an earthworm and identify the species. It is also possible that the reader was wondering if all the worms she found are earthworms, even the one that is smaller than the other two. To this, all we can say is that all three seem to be earthworms, as even the small worm that is hard to see in the photo has a clitellum, at least according to the reader, which once again means it is either an earthworm or a leech, and it looks a lot more like an earthworm. (The fact that it is smaller than the other two worms isn’t really relevant – earthworms can be many different sizes.)

So, all we can say is this: at least two of the creatures our reader found have a visible clitella, and they definitely don’t look like leeches, so they must be earthworms. Perhaps, and hopefully, this is all the reader wants to know.

Article Name
Earthworms and Clittela (Clittelums)
Description
We think our reader found earthworms because they look like earthworms, and the fact that at least two have a visible clitellum suggests the same.
Author
All About Worms
Share the knowledge