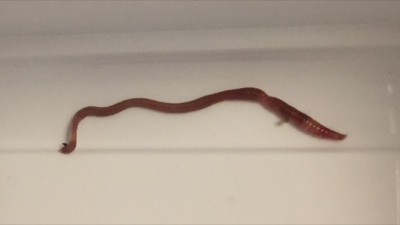 Earthworm In Toilet From Pipes Not Humans

A reader recently sent us this message, “I found this worm in my toilet. I am fairly sure it is an earthworm but I’m not an expert. What do you think? My wife is freaked out and would like reassurance that it hasn’t come out of one of us. It was still alive in the toilet. I took it out and put it in a box. It was still alive about 15 hours later.” The first photograph he sent shows the creature placed next to measuring tape, so we can see that it is about 3-4 cm long: 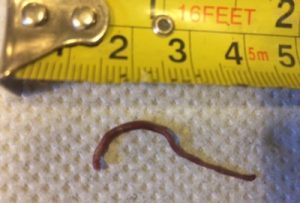 In addition to its size, we can see from the photo that the worm is a purple/brown color and has a thin, segmented body. We agree with our reader’s identification; this is an earthworm! Not only do all the physical characteristics of this worm match with an earthworm, the location of discovery is also a normal place to find an earthworm. We usually hear from at least one reader a month who finds an earthworm in their toilet. 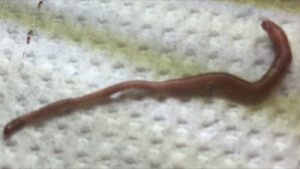 While we know this is an earthworm, we aren’t as confident about the reason it was swimming in our reader’s toilet. There are endless possibilities for why and how worms and worm-like organisms end up inside a home. Sometimes they crawl in through the tiny gaps between doors, windows, walls, and ventilation systems. Sometimes they are unintentionally transported in on a shoe or pet that they are attached to. We think this earthworm probably ended up in our reader’s toilet by means of the pipes and plumbing system.

Earthworms need a lot of moisture to survive since they breathe through their skin and they will suffocate if their skin dries out. Earthworms typically live in moist soil underground, but they could potentially get pushed into a pipe or plumbing system during heavy rains or if there was a small gap or opening. Since our reader only found one of these worms and not numerous, we don’t think he needs to worry about his pipes or hire a plumber to investigate. Rather he can just place the worm back outside. If he continues to find earthworms in his toilet then he can revisit the idea of looking into his plumbing system for an issue.

In conclusion, we agree with our reader that the creature he found in his toilet is an earthworm, not a parasite as his wife feared. That being said, if he or his wife are worried about their health or truly believe this worm came from one of their bodies, then they should visit a doctor since we are not medical professionals and are therefore not licensed to give medical advice of any kind.