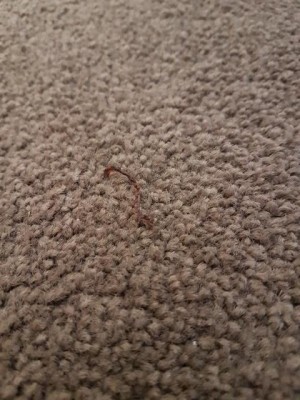 We recently heard from one of our readers about some mysterious worms she discovered in the master bathroom and bedroom of her new home. She said one of the creatures was alive and she got rid of it, and then checked out everything and vacuumed. The next day she found 3 more dried out worms on the floor of the bedroom. She would like to know what these creatures are and how she can get rid of them. 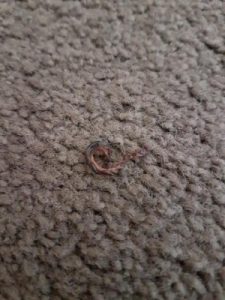 The worm in this photo is a little hard to see clearly because it blends in quite well with the carpet in the background. It appears to have a long, thin body, and to be a purple/brown color. While we aren’t sure of the identity of these mysterious specimens yet, we can confidently rule out carpet beetle larvae. Carpet beetle larvae are the most common organisms that readers find in their carpets, so without a picture we would probably guess that is what our reader is dealing with. However, carpet beetle larvae have small, oval-shaped bodies that are rust colored and covered in tiny hair-like bristles! So, not a match for the creature in the photo. Here is another photograph our reader sent: 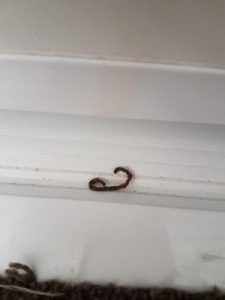 We have heard from readers on other occasions that have been dealing with a similar situation as this reader. On one occasion, a reader found earthworms on his carpet after heavy rains and determined that they were sneaking in through a crack under his door. On another occasion, a reader mysteriously found worms on her carpet, but we were unable to confirm an identification or the source of these worms. Unfortunately, we think this will be a repeat of the latter. We think our reader is probably dealing with earthworms, but we aren’t certain, and we don’t know where these worms could be appearing from.

We suspect they are coming in through a small crack under the window or door in our reader’s home. Since she mentioned the worms were dead and dried up, we think they might be severely dehydrated. We recommend she place the worms back outside and then investigate for the gaps where the specimens could be sneaking in from, and properly seal them up to prevent future visits from these creatures.

In conclusion, one of our readers discovered some worm-like organisms on the floor of her new home. We think the creatures might be dehydrated earthworms that have crawled in through a small opening in her home.

Article Name
Dried Worms on Floor of New House
Description
One of our readers discovered some worm-like organisms on the floor of her new home. We think the creatures might be dehydrated earthworms that have crawled in through a small opening in her home.
Author
Dori Franklin
Comments: 0 Posted by: Worm Researcher Dori Categories: Earthworms, Worms Found in the House