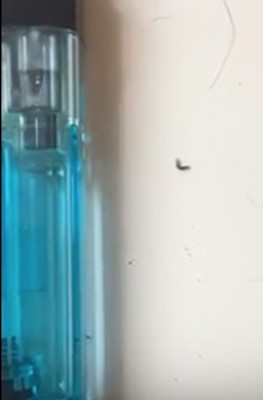 We recently heard from a reader in Istanbul. He explained that he has been finding some worm-like organisms around his home this summer. He finds them on his couch, on his bed, in the bathroom sink, and in the toilet bowl. He wrote, “I researched your website and found that they look like drain fly larvae and also flea larvae. I would like to know which they are.” He also let us know that he has a cat and that his apartment is quite humid. The photo he sent us shows a tiny worm-like organism next to a lighter. 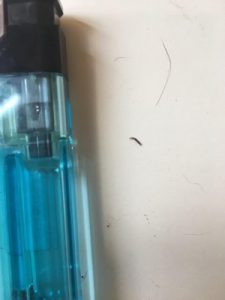 Other than the minuscule size of this creature, the photo doesn’t help us out much with identifying physical features. However, based on what our reader told us, we think it might be a possibility that he is dealing with both drain fly larvae and flea larvae in his home. Both of these larvae are common household pests and both have similar appearances, but they typically live in different environments. So, it is possible that he found both of these larvae in different areas of his home.
Drain fly larvae breed in the organic matter that builds up inside and around a drain. Therefore, we think the specimens our reader found in his sink and toilet are drain fly larvae. To get rid of drain fly larvae, our reader will need to thoroughly clean out his toilet and his shower. For more detailed instructions on how to accomplish this, he can check out one of our many articles about getting rid of drain fly larvae. Drain fly larvae aren’t considered dangerous or known to transmit or carry human diseases.
We think that the creatures our reader found on his bed and couch are flea larvae. Since our reader mentioned he has a cat, he will need to bring his cat to the vet to be diagnosed and treated for fleas. Once this is taken care of, our reader will need to wash all of his bedding, couch cushion covers, cat bedding, and any other areas where his cat spends time. He should also wash all of his cat’s toys and consider throwing out the ones that can’t be washed. Finally, he will need to vacuum, sweep, and mop his house daily until he is confident his home is flea-larvae free!
In conclusion, one of our readers wrote to us about small worm-like organisms he found in his bathroom and in his bedroom. We believe the creatures in his bathroom are drain fly larvae and the creatures in his bedroom are flea larvae. 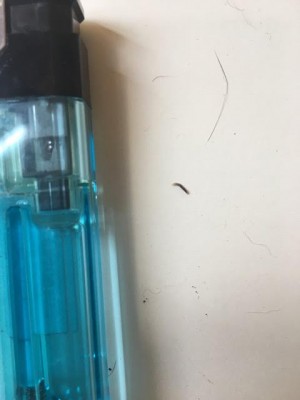 Article Name
Drain Fly Larvae or Flea Larvae?
Description
One of our readers wrote to us about small worm-like organisms he found in his bathroom and in his bedroom. We believe the creatures in his bathroom are drain fly larvae and the creatures in his bedroom are flea larvae.
Author
Dori Franklin
Comments: 0 Posted by: Worm Researcher Dori Categories: Drain Fly Larvae, Worms Found in the House