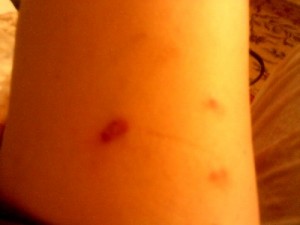 There are many different types of skin worms, but what’s confusing about these types of “parasites” is, they are not actually worms at all. Worms in humans typically infect the intestines, but at night specific types of worms can be found around the infected person’s anus. This can cause intense itching and scratching around the area. If you suspect that a worm may have entered your body through any other area of the skin, such as the legs or arms, it is highly unlikely that this is the case. “Skin worms” are not actual worms on the skin, although the skin plays a major role in these conditions or “parasites.” There are several conditions that are commonly called “skin worms” including ring worm and Morgellons disease.

Ring worm, also spelled “ringworm,” is a fungal infection that can be found on the surface of the skin. The infection earned the name ring worm because it was earlier thought that the infection was caused by an actual worm. This is not the case. Ring worm or “tinea” (which means “growing worm” in Latin), is caused by a fungus that creates a ring on the skin. The ring happens to look like a worm.

Ring worm remains on the surface of the skin, hair or nails until treated and it does not invade other parts of the body, such as the insides or mucus membranes. Ring worm does, however, thrive in moist, warm conditions on the skin, such as the areas around the groin and between the toes. It is very easy to catch ring worm in places such as locker rooms, showers, and swimming pools.

There are eight types of ring worm including:

If you notice rashes, rings on the skin or scaly patches on the skin, you might have ring worm. A doctor will diagnose the condition through one or more methods. The condition may be diagnosed by sight or the doctor might collect skin scrapings to view under a microscope. In addition, doctors might use a method that involves collecting a culture of the affected skin.

For severe cases of ring worm, oral medications may be necessary. Some of the most common antifungal tablets include: griseofulvin (Fulvicin, Grifulvin, and Gris-PEG), fluconazole (Diflucan), itraconazole (Sporanox), and terbinafine (Lamisil). Griseofulvin is one of the oldest antifungal medications available. Some feel that is unsafe (taxing on the liver) and not as effective as the newer medications. When used as prescribed, however, physicians consider older and newer oral medications safe.

Morgellons Disease is quite different than ring worm and currently there is no cure. If you have what appear to be very thin worms crawling underneath the skin; black threadlike materials on the skin; or black specks or materials on the clothing, you may have “Morgellons Disease.” According to the The Morgellons Research Foundation (MRF), “Morgellons is an unexplained and debilitating condition that has emerged as a public health concern. Recently, the Centers for Disease Control and Prevention (CDC) have received an increased number of inquiries from the public, health care providers, public health officials, Congress, and the media regarding this condition.” Individuals that may be afflicted by this condition “report a range of coetaneous symptoms including:

According to MRF, more significant than skin symptoms, in terms of the diminished quality of life of the individual with this illness, are symptoms unrelated to skin, to include Chronic Fatigue Syndrome (CFS), Fibromyalgia (ME), joint pain, and significant problems with concentration and memory. Remarkably, not all people with Morgellons Disease have overt skin lesions, as some individuals report intact skin. The troubling sensations and accompanying physical structures, are the consistent clues to this infectious process.

In addition, the MRF states that the “fibers,” (which have yet to be identified), associated with skin lesions can be described as coenocytic (aseptate), smooth-walled, branching, filamentous objects. The elongated fibers are often twisted into balls or what appear to be bundles of fibers, as they grow within the skin. Many people refer to these bundles as fiber balls, fuzz balls, or lint balls. The fibers are clearly hyphae-like structures, and yet, do not fall within the description of known hyphae or pseudohyphae. The fibers are most often white, but are also consistently seen as blue, black, and rarely red. -Morgellons Research Foundation

Morgellons cases can be found across the U.S., but 24% of all families registered with the Morgellons Research Foudnation reside in the state of California. The Morgellons Research Foundation (MRF) has received registrations from people reporting this condition from all fifty U.S. states and 45 other countries. MRF has received the most registrations from other countries such as Canada, Australia, England, South Africa, and the Netherlands. To date, more than 13,000 families have reported that they suffer from this disease.

As stated earlier, there is no cure for Morgellons, but doctors are attempting to treat the condition with antibiotics that address one or more candidate infectious bacteria or protozoa. In addition, the MRF states that, “most Morgellons patients, if found positive for Chlamydophila pneumonia, a Babesia species or a Borrelia species pathogenic to humans and given appropriate antibiotics long enough, resolve most symptoms.”

Ginger Savely, a nurse practitioner in Austin, Texas, says she has treated 35 patients with symptoms. “Everyone tells the exact same story,” she says. “It’s just so consistent.” Savely prescribes her patients a course of broad-spectrum antibiotics. “If I knew what I was dealing with,” she says, “it would be easier to treat.” Yet, she says, her patients improve within weeks.

Other clinicians have likewise prescribed antibiotics. Dr. Raphael Stricker, a Lyme disease specialist in San Francisco, sees a handful of Morgellons patients–all of whom have tested positive for chronic Lyme disease. He thinks that Borrelia burgdorferi, the bacteria behind Lyme disease, has set his patients up for another, as-yet-unidentified, infection. And Dr. George Schwartz, a Santa Fe, N.M., trauma specialist, treats his patients with antibiotics targeted to Stenotrophomonas maltophilia–a usually harmless waterborne bacterium–and says he’s seen them improve in only 48 hours. -Popular Mechanics, June 2005 Issue

If you have symptoms of Morgellons, talk to your doctor or dermatologist immediately. If your doctor seems to be at a loss, contact The Morgellons Research Foundation for help. They might be able to locate a physician that can help or provide information about clinical trials or studies that you might be able to participate in. For further write or email:

Just a few of the different types of parasites that may infect humans include: tapeworms, (Cestodes); hookworms, pinworms, and roundworms (Nematodes); giardia (Protozoa); and flat worms, (Trematoda).

The most common type of worm in humans is the roundworm. It is estimated that one in every four humans is infected with roundworms. It is important to keep in mind, however, that parasites rarely cause any serious (or fatal) complications in Europe and North America. No matter what type of worm the human body may be infected with, whether it’s a bloodworm that somehow made its way into the human digestive system (extremely rare) or a roundworm, the vast majority of parasites cause some of the same unpleasant symptoms. Symptoms of parasites or worms in humans may include:

It is important to keep in mind that these symptoms are also common symptoms for many other diseases and conditions, so its best to consult a physician for an accurate diagnosis. A physician will test for parasites by taking a feces sample and examining it for parasites and/or eggs. Fortunately, the vast majority of parasites can be eliminated by using some of the same methods or by ingesting some of the same types of medications or antibiotics.

Parasites can be eliminated from the body through the use of colon cleansers and/or colonics, several rounds of antibiotics or medications as prescribed by a physician, and/or by utilizing a number of different herbal or natural remedies. It’s best to consult an herbalist for the very best herbal remedies to get rid of worms in humans. That said, there are several popular (and effective) remedies consisting of the following combinations of herbs and ingredients:

In general, herbal remedies should be taken orally for a minimum of two weeks.

Some individuals may complain of re-infection. It is very important to change your eating habits immediately if you suspect a parasite or worm infection. It’s best not to go back to your regular eating habits in order to prevent re-infection. Certain foods, spices, and beverages might help to ward off parasite infections or to keep you from becoming infected through food or water sources. These include:

Avoid the following foods and activities if at all possible:

And finally, never underestimate the power of clean hands! You should always wash your hands thoroughly after using the bathroom whether it is in your home or in a public place. In addition, wash kitchen utensils and countertops with hot soapy water after each use and wear gloves when changing your cats litter box or cleaning up after your pets.

This many people searched for this info: 3,175