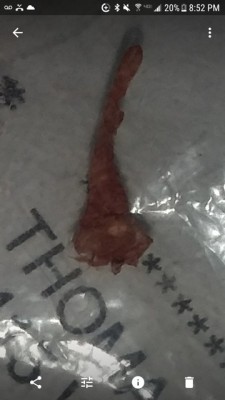 Was what Reader Found in His Ear a Worm?

We recently heard from a reader who experienced something pretty bizarre. He explained that his ear turned “painful, red, hot, and swollen.” A few days later something expelled from his ear. This is tho photo of what came out of his ear: 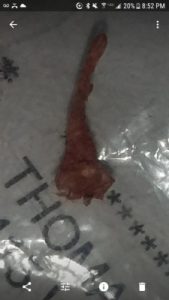 His question is “What is this?” We assume he believes it to be a worm or a worm-like organism since he did write to us about the situation. While it doesn’t exactly resemble a worm or worm-like organism in the photograph, it might have been moving and clearly alive when it came out of his ear. This specimen isn’t anything we are familiar with.

There is a long list of potential things that can disturb someone’s ear. It might indeed be some type of bug or worm, or it could just be uncomfortable earwax. People have discovered maggots, spiders, cockroaches, pinworms, moths, ticks, fruit fly larvae, and crickets in their ears. Whatever our reader found doesn’t resemble any of those creatures. We aren’t able to identify what our reader found in his ear.

Since he did experience a few symptoms before this object emerged from his ear, we encourage him to go see an Ear Nose and Throat doctor. If he hasn’t disposed of the object yet, he should bring it along with him to show the doctor. We are not medical professionals, so we aren’t licensed to give medical advice! We are sorry we aren’t able to be of more help to this reader!

In summary, one of our readers felt his ear swell up and become painful. A few days later something came out of his ear. Despite the picture he shared with us, we are unable to identify the specimen. We encourage him to go see a doctor to solve this mystery!

Article Name
Was what Reader Found in His Ear a Worm?
Description
A reader felt his ear swell up and become painful. A few days later something came out of his ear. Despite the picture he shared with us, we are unable to identify the specimen.
Author
Dori Franklin
Comments: 0 Posted by: Worm Researcher Dori Categories: Gross Worms