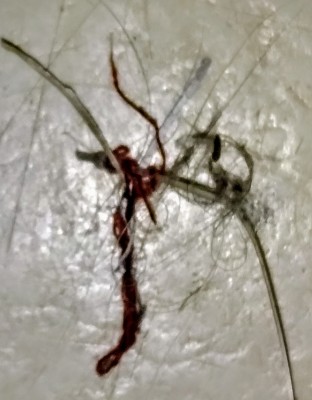 “I need help please” starts this reader in his query in which he asks for our “thoughts on these” organisms pictured below. The first photograph shows what looks to be a long, thin, dark red worm-like organism tangled in hair and other debris, and the second photo displays what we can only describe as white, cloud-like matter. 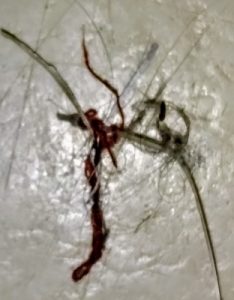 We will say right off the bat that we will not be able to identify the white organism with any degree of certainty. The resolution of the photo is quite poor, unfortunately, so we cannot make out any of the organism’s physical characteristics. This is why we refer to it a ‘cloud’: its body is so devoid of any physical features and is such a strange shape that it does not resemble any organism we know of, but instead looks more like a stretched-out cotton ball. Perhaps if our reader had given us any context, that would have clarified something, but alas, our reader only told us what we quoted above. If our reader believes the white organism to be linked to the red worm above, then perhaps it is a collection of eggs, or perhaps some silk-like secretion. We cannot tell. 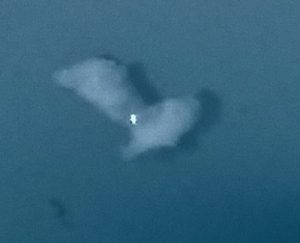 Now, when it comes to the red worm, there are several options for what it could be. The likeliness of each identification we are about to provide depends heavily on the context in which the worm was found, so we will not be able to give a concrete answer. Nonetheless, we will still provide some suggestions based on the photo, which in actual fact, does give us a fair amount of context. It tells us the size of the worm relative to the hair in which it is tangled, and it tells us that the worm is even able to get tangled in on itself, a feat which many worms are not able to achieve (if one can consider it an achievement). The first worm that comes to mind because of this entanglement is the horsehair worm. Otherwise known as the Gordian worm (named after the Gordian knot), the horsehair worm is a parasite that infects insects, living inside them until adulthood, at which they burst forth from the insect when they are near a body of water. People can sometimes find horsehair worms in their home after an infected insect enters it and ends up near a water source.

Alternatively, this worm could be an earthworm or some type of bloodworm. That said, the only bloodworms that are this red are either tubifex worms, which are much smaller than this worm and tangle in large groups, and red midge fly larvae, which do not grow to this length. For that reason, we find it unlikely that this is a bloodworm. We thought we would suggest it either way, given the red color of this worm. Now, it could be an earthworm, as the size and length would make sense, yet earthworms do not get tangled in on themselves like this, so we also find this identification unlikely.

Either way, we do not think our reader has to worry about this worm negatively affecting his health. Of course, he should still be cautious if and when handling the worm in order to move it outside (which is what we recommend doing), and we suggest using gardening gloves and a dustpan in order to avoid skin-to-skin contact: unexpected allergic reactions may still occur.

To conclude, we are not entirely sure what our reader found. The white blob could be anything, and we do not have a good guess as to what it is. If our reader would like to send us pictures taken in better lighting, and which are of a better resolution, of the same organism, so that we can have another go at identifying it, he is welcome to. Out of the identities we suggested for the red worm, we think it most likely that it is a horsehair worm, but we still say this with little certainty; a sharper photo and some context would go a long way in helping us identify the creature with more confidence. Regardless, we hope that the suggestions we provided still prove insightful, and we wish our reader the best.

Article Name
Dark-Red Worm that May be a Horsehair Worm Found Alongside White, Cloud-like Matter
Description
"I need help please" starts this reader in his query in which he asks for our "thoughts on these" organisms pictured below. The first photograph shows what looks to be a long, thin, dark red worm-like organism tangled in hair and other debris, and the second photo displays what we can only describe as white, cloud-like matter.
Author
Worm Researcher Anton
Share the knowledge

1 thought on “Dark-Red Worm that May be a Horsehair Worm Found Alongside White, Cloud-like Matter”