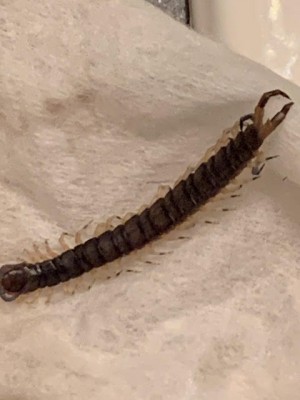 Dark, Multi-Legged Creature is a Centipede

“What kind of worm is this?” wonders one of our readers, who recently sent in a photograph of this dark goliath. The creature in question appears to be black/dark brown in color, with a long, segmented body, a bulbous head with pincers on either side, a forked tail and many, many legs. 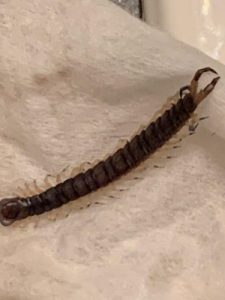 From that description alone, it is clear that this critter could be nothing other than a centipede. Centipedes are not actually worms, but are arthropods. This means they have a tough, segmented exoskeleton which protects them from predators and that they have jointed appendages. Centipedes can be found in all corners of the earth, and come in many sizes, but not so many shapes. They are distinguished from other arthropods by their multiple legs which sprout from every segment along their entire bodies, as well as the antennae and/or pincers on their heads. As opposed to millipedes (the centipede’s mild-mannered cousin for whom the centipede is often mistaken), whose legs are on the underside of their bodies and thus often imperceptible, centipedes’ legs sprout from the sides of their bodies and so are on full display.

The photograph our reader presented to us is excellent, and we thank her for it. That said, our reader provided no context with her query, so we do not know what environment or region of the world it was found in, which makes it difficult to identify its specific species. In addition to that, there is nothing in the photograph to which we can compare the size of the centipede, which would have been another thing we could have used to identify the critter. Nonetheless, we will provide some general information on centipedes that we hope will be of some use to our reader.

Centipedes are naturally predatory creatures, and will hunt anything from mites to mice (depending on their size). As previously stated, there are a great number of species of centipedes, coming in all sizes and colors. The most important factor to take into account when dealing with centipedes is their size; the bigger the centipede, the more dangerous. When hunting, centipedes inject venom in their prey using the pincers by their head to inflict great pain, paralysis, or even death. Centipedes will not bite humans unless provoked, as we are far too big for them to consider killing. However, there are species of giant centipedes (like those in the Amazonian rainforest in the South Americas) that have been known to attack animals that are several times larger than they are, so one should still try to stay out of their way and not provoke them. Even though a centipede’s venom is not enough to kill a human being, it is still incredibly potent and can still cause immense pain and land one in the ER (again, depending on the size of the centipede). Some smaller species of centipede, like the common house centipede, can be found in the home and are even considered beneficial house guests by some as they kill mites, mosquitoes and cockroaches without leaving any webbing or nests behind.

In conclusion, the “worm” our reader found is actually a centipede! We are not sure of its exact species, but if any of our other readers have any idea on that front, they are free to comment any suggestions below.

Article Name
Dark, Multi-Legged Creature is a Centipede
Description
"What kind of worm is this?" wonders one of our readers, who recently sent in a photograph of this dark goliath. The creature in question appears to be black/dark brown in color, with a long, segmented body, a bulbous head with pincers on either side, a forked tail and many, many legs.
Author
Worm Researcher Anton
Comments: 0 Posted by: All About Worms Categories: Centipedes and Millipedes, Pest Worms, Worms Found in the House