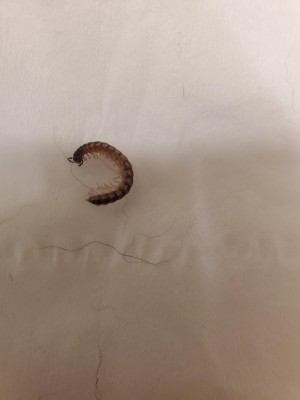 “It was dark and had many legs”, said this man. living in a “hotel-like apartment complex”, about something he found curled up on his floor. The creature in question is an elongated shape, has multiple pairs of legs sprouting from each section of its segmented body, and is a dark brown/black in color. 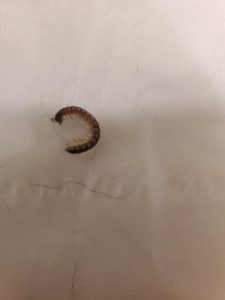 Our reader expanded on his situation, saying that this complex, which is based in the Kansas City area, is fairly new and has no carpeting. He says that pest control “just came by the other day to spray.” He was then walking through his apartment with his puppy Knox (adorable name, by the way) when he noticed the creature lying next to his “washer/dryer combo.” This little critter was barely moving when our reader picked it up with a tissue. He thinks it may be a millipede. According to our reader, his primary question is whether or not he has to worry about finding more, or if this was a “fluke.”

To start off with, we would agree with our reader’s identification of this creature as a millipede. This is given away by the sheer number of legs this critter has, but also by where the legs are on its body. As opposed to a centipede, whose legs sprout from the sides of every segment, the millipede has its legs on the underside of its body. For that reason, its legs can often go unnoticed when it is in motion. Now, when it comes to this millipede, our reader reported it barely moving. As we see from the photograph, the millipede is lying on its side, curled up in a ‘C’ shape. This is a common defense mechanism millipedes use when they feel threatened, which is that they play dead. It seems that its act did not have our reader fooled though, who noticed that it was clearly not dead. Additionally, upon handling a millipede, they may secrete a foul-smelling toxin — depending on the species — that can, at most, cause blistering on the skin. We advise that our reader wears gardening gloves or something of the sort when picking up the millipede to move it outside. Not to worry though, these are the millipede’s sole defense mechanisms. Unlike centipedes, millipedes do not bite and pose no real threat to human health, or pet health for that matter.

Now, to answer our reader’s question, does he have to worry about finding more millipedes, or was this a one-off occurrence? We cannot say for certain, as we would not be able to for any one creature that one might find in their home, and only our reader can find this out by searching his home for more millipedes. Infestations of millipedes are possible, especially if there is a room or area in the home that is particularly cool and damp, as these are the preferable conditions for millipede habitats. Given that our reader’s apartment is new, and pest control just swept the place, we would say that it would be more unlikely for our reader’s fresh, and presumably dry, apartment to be experiencing an infestation than an old house with an unfinished basement, for example. It is more likely that it came in through a window (depending on what floor he is on), or was on a plant that was brought into the apartment. That said, we still would not be able to assure our reader that he would not find any more at all. He could very well find more, or it could be a “fluke” (but not the worm that is called a fluke), as our reader put it. We simply encourage our reader to search his apartment for more millipedes.

In conclusion, the creature our reader found in his apartment complex is a millipede. These harmless critters can be a nuisance when they infest homes, but it is more likely for them to infest a house with a basement and/or a garage, and especially one with a garden where leaf litter and mulch might build up that the millipede wants to eat. Of course, that does not completely rule out our reader’s apartment as a site for infestation, and although we would deem it unlikely, we still recommend that our reader checks for more millipedes, just to be sure. But we hope, for his sake, that this was a fluke!

Article Name
Dark Creature with Many Legs in Kansas City Apartment Complex is a Millipede
Description
"It was dark and had many legs", said this man. living in a "hotel-like apartment complex", about something he found curled up on his floor. The creature in question is an elongated shape, has multiple pairs of legs sprouting from each section of its segmented body, and is a dark brown/black in color.
Author
Worm Researcher Anton
Comments: 0 Posted by: All About Worms Categories: Centipedes and Millipedes, Garden Worms, Worms Found in the House