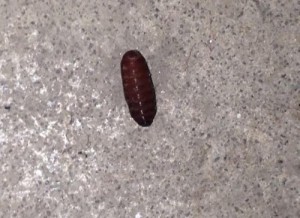 One of our readers sent us a photo that she found of an interesting creature that she found in her basement. She said that her basement is very damp and humid. It appeared to be very small, she said it was ½ cm in length. She said she found it near a spider and it seemed to be eating the spider. She said it was dark brown in color. From looking at the picture, this creature is quite possibly part of the Armadillidiidae family. These are often called roly polies or pill bugs. 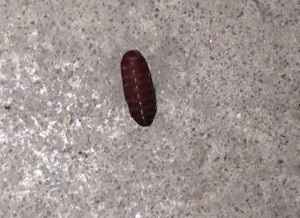 The most interesting feature of these pill bugs is that they can roll into a small ball when they are threatened or scared. There are quite a few other creatures that also do this such as millipedes and armadillos. This is the way that they protect themselves against unwanted predators.

Pill bugs have quite the interesting diet that usually consists of feces and other decaying matter. Fairly frequently, they have been known to eat their own feces. This is why we found it interesting that our reader mentioned that this pill bug was eating a spider. Perhaps it was eating feces or other matter that was near the spider.

There are over 4,000 species of creatures in the Armadillidiidae family. Twelve of these species are located in the Northern and Central United States. There are also many species that are found in the Florida Wet Lands areas.

So our reader has found a type of pill bug or roly poly. They are found fairly often in basements, but we are unsure if it was actually eating the spider considering their diets do not consist of other insects.

Article Name
Dark Brown 'Worm' in Basement Probably a Roly Poly
Description
One of our readers sent us a photo that she found of an interesting creature that she found in her basement.
Author
All About Worms
Comments: 3 Posted by: Previous Author Categories: Interesting Bugs