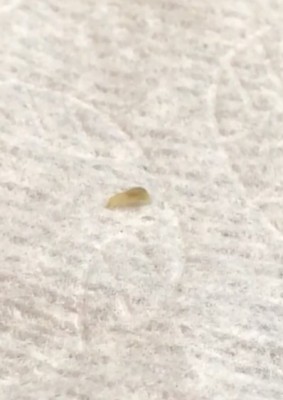 July 18, 2017
We recently heard from a reader in southwest Pennsylvania. He explained that he found two “creepy crawlers” in his house. He thinks they were probably dragged in from outside, as there is a lot of wildlife in his yard. He even provided a great video, and during the last few seconds the worm-like organism starts “dancing”. So what are these “creepy crawlers” that our reader has discovered? Here is the video he shared with us.
The creature has a yellow body with a tan stripe down its back. It is rather small, and it is a little round. Based on the way it moves and its appearance, we are confident that our reader has discovered a caterpillar, which is the larva of a moth or butterfly. Also, since this creature is significantly larger and rounder than the typical caterpillar, we bet it is almost ready to pupate and mature into a moth or butterfly!
We aren’t sure which type of caterpillar our reader has found. There are more than 20,000 species of caterpillars around the world and they can be hard to distinguish by markings alone. Many different species of caterpillars look identical, which can make the process of identifying them even more of a challenge. One of the easiest ways to identify caterpillars is to figure out their food source. Different species of caterpillars eat different plants and foliage. In fact, a lot of caterpillars are considered agricultural pests for the damage they can do on crops when they feed in large numbers. If our reader is really curious about the species of caterpillar he found, he should investigate the plants in his yard for these small yellow larvae! If he is able to figure out which plant they are feeding on, identifying the caterpillar will be a much easier process.
In summary, a reader sent us a video of a yellow caterpillar. We aren’t sure of the exact species, but we think it is probably about to mature into a moth or butterfly!

Article Name
"Creepy Crawlers" are Caterpillars
Description
A reader sent us a video of a yellow caterpillar. We aren't sure of the exact species, but we think it is probably about to mature into a moth or butterfly!
Author
Dori Franklin
Comments: 0 Posted by: Worm Researcher Dori Categories: Caterpillars