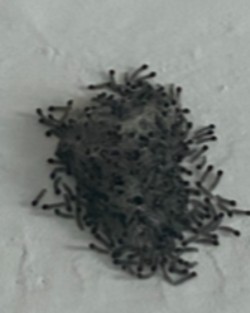 Creepy Cluster of Larvae on Wall are Fall Armyworms

A “creepy thing” has been found on the upper part of this reader’s living room wall. The thing in question appears to be a massive cluster of some kind of grayish-black worm, and our reader says she would appreciate any kind of information on this phenomenon. 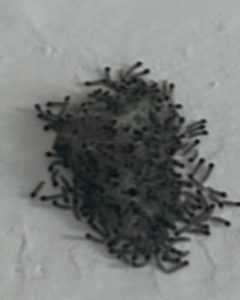 In addition to the excellent photograph attached to her question, our reader elaborates that when she “crushed” the “creepy thing”, “it sounded crispy on the inside.” First of all, we wish to point out to any of our readers that if you find something in your home that appears to be an organism, we advise against crushing it. Not every worm you find in your home is going to be venomous or parasitic. Further to that, not only do organisms have intrinsic value, but without any knowledge on what you’re crushing, you could be killing off an endangered animal, or an animal that is beneficial to the environment. Secondly, we can confirm that this “creepy thing” is indeed a cluster of newly hatched larvae, namely of fall armyworms.

Fall armyworms (otherwise simply referred to as FAW) are caterpillars of the fall armyworm moth. One can tell from the adult moth’s name that this species of moth is far better known for its larval stage than its adult stage. Unfortunately, it is not better known for a positive reason. Fall armyworms are, if we may, perhaps the most notorious agricultural pest across the globe. Just as the caterpillars are born in clusters, they move as an army (hence the name) to feed on crop plants, feeding on their leaves and stems and causing heavy damage. Seeing as they feed on 80+ plant species and are near impossible to completely eradicate, fall armyworms pose a substantial threat to the economy of various countries whose agriculture is the source of their income. They are, in fact, a threat to crops all around the world, as shown by this distribution map provided by CAB International. That being said, fall armyworms pose no health threat to anyone who finds them in their home. They are not known to carry disease, and although they have been recorded to carry parasites, these parasites tend to stay inside the armyworms, and will not infect other organisms (though to be better safe than sorry, we advise not consuming them). 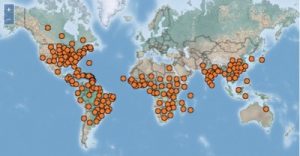 Now, as armyworms feed on crops, they are not pests of the household (though we would not put it past them to chew through one’s houseplants if given the chance). For that reason, we would assume that this cluster ended up in our reader’s living room because either the mother moth flew into the house, was stuck and laid her eggs there as it was simply time, or she flew and in and laid them on purpose, seeking shelter from whatever weather conditions might have plagued her on the day. Given that our reader reports crushing the worms, we assume she has already disposed of them as well. But, for any of our other readers, we advise that upon discovering an armyworm cluster, try to move them outside, preferably somewhere where they might still have food but where they will not be a threat to anyone’s garden or farm.

To conclude, the “creepy” cluster of worms our reader found on her living room wall are fall armyworms. Although these caterpillars pose plenty a threat to plants, they are harmless with regard to humans and other organisms, and so our reader needs not worry. We hope that our reader can put her mind at rest now, and that she is doing well and staying safe during these unprecedented times.

Article Name
Creepy Cluster of Larvae on Wall are Fall Armyworms
Description
A "creepy thing" has been found on the upper part of this reader's living room wall. The thing in question appears to be a massive cluster of some kind of grayish-black worm, and our reader says she would appreciate any kind of information on this phenomenon.
Author
Worm Researcher Anton
Comments: 0 Posted by: All About Worms Categories: Army Worms, Garden Worms, Pest Worms