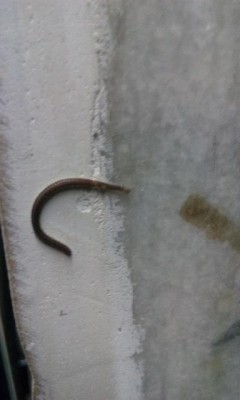 Creature Found During Monsoon Could be an Oligochaeta

During a monsoon a reader saw an interesting creature that left a mark on her body. She explained that the creature didn’t bite her, but rather left a mark like a burn on her body: 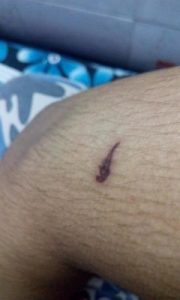 The picture she included provides a great look at the specimen. It has a purplish/brown segmented body, and then a cone like protrusion off of what we believe is its anterior end. Oligochaete are a class of animal in the phylum Annelida, which is made up of both terrestrial and aquatic worms, including all types of earthworms. There are over 3,500 known species of Oligochaete. These worms live in fresh water, the sea, and moist soil. Since our reader found this worm during a monsoon, it could have come from the sea, or could have escaped saturated moist soil to find drier land. Most marine Oligochaete live under the rocks that line the shore. There could be thousands or millions of these worms in a given body of water. In one square meter of lake bottom, you might count as many as 4,000 Oligochaete!

Oligochaete have segmented bodies, and the first segment is often a smooth lobe or cone that doesn’t have any sensory organs. Sometimes this lobe is extended to form a tentacle. You can easily make out this lobe on the creature in the photograph sent by out reader. We believe this smooth lobe might be what left the burn mark on our reader. If she is concerned that the wound might be more than a superficial mark, or is experiencing other symptoms like dizziness or fever, she should see a doctor immediately. If she believes it is a superficial wound, she should clean it and treat it like she would any other small cut or burn.

To sum up, one of our readers was burned or stung by a segmented worm during a monsoon. We believe it is an Oligochaete.

Summary
Article Name
Creature Found During Monsoon Could be an Oligochaeta
Description
One of our readers was burned or stung by a segmented worm during a monsoon. We believe it is an Oligochaete.
Author
Dori Franklin
Comments: 0 Posted by: Worm Researcher Dori Categories: Segmented Worms Annelida