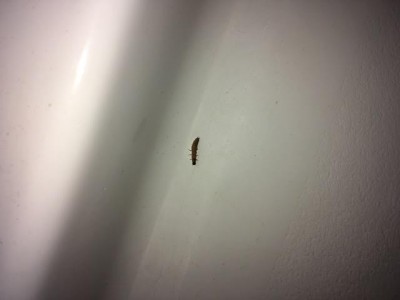 We recently heard from a reader in Edmonton, Canada. He discovered a specimen in his shower basin. He thought it could be trapped there, and was unable to get out because of the smooth walls of the tub. He explained that the creature is about half an inch long, and white or yellow colored. He also mentioned that he doesn’t have cats or dogs, so it definitely didn’t come from a pet. He wonders what this specimen could be. 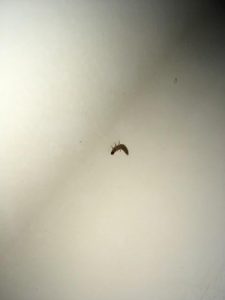 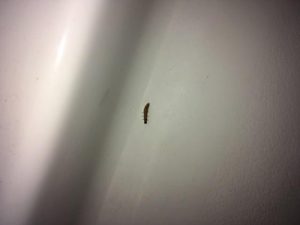 The specimen appears to have a tan body and a darker head. It has about 6 legs (we can’t tell if there are more) and a long posterior end. We aren’t sure what this creature is or how it ended up in our reader’s shower basin.

We write about critters that were discovered in showers and bathtubs fairly often, but we aren’t familiar with this particular creature. We can say with certainty that it isn’t any of the usual suspects: an earthworm, drain fly larva, or bloodworm. Earthworms are brown, long, and segmented, and don’t have any legs. Drain fly larvae are grey and much smaller than this specimen. Finally, bloodworms are bright red, thin, and long.

We think this might be some sort of larvae, but we aren’t sure which kind. There is also the possibility that this isn’t a larvae or worm, but an insect. Unfortunately, we can’t identify this creature. We also don’t know how it ended up in the shower basin. It might have crawled in and gotten stuck, as our reader suspected. It also could have come up through the drain. Since our reader only found one of these creatures, he shouldn’t worry too much about it. If he continues to find critters in his shower basin, he can begin to investigate further.

To conclude, one of our readers found an curious specimen in his shower basin. Unfortunately, we don’t know what kind of creature he discovered.

Article Name
Creature Discovered in Shower Basin
Description
One of our readers found an curious specimen in his shower basin. Unfortunately, we don't know what kind of creature he discovered.
Author
Dori Franklin
Comments: 0 Posted by: Worm Researcher Dori Categories: Worms Found in the House