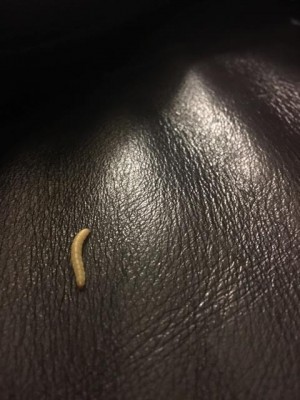 Could Worms Found on Leather Couch be Mealworms?

One of our readers recently reached out to us because he has been finding some worm-like organisms on his leather couch. He explained that he hasn’t seen them anywhere else in the house, and cannot figure out what they are or where they are coming from. He is worried that the creatures might be inside the couch, and therefore he would need to get rid of the couch. He said that they have had the couch for years and bought it brand new, so it didn’t come from an unknown environment. This is the photograph he sent us: 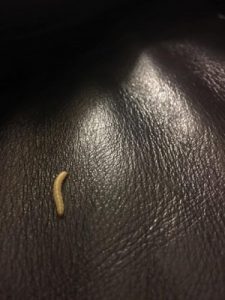 The creature is off-white colored with a segmented body. We think it is probably a little less than an inch long, but we don’t know its exact size because we have nothing to compare it to in the photograph. Based off of the picture, we think this specimen might be a mealworm.

Sadly, we don’t have definite answers for either of these questions. The specimen certainly resembles a mealworm, but we have never heard of mealworms eating leather (or any other worms eating leather for that matter.) The creature also looks a little bit like a palm flower moth larvae. Palm flower moth larvae usually have more of a pink hue to their coloring, but they have similar body shape and type to the specimen in the photo. Palm flower moth larvae live in palm trees, but sometimes sneak into homes in order to pupate. However, we also don’t know why these larvae would be so interested in a leather couch. Unfortunately, we can’t offer much advice to our reader other than to thoroughly clean the area around the couch and the couch itself in hopes to eliminate whatever mysterious food source is attracting these creatures.

To summarize, one of our readers has been discovering worm-like organisms on his leather couch. We think the specimens might be mealworms, or some other type of larvae. If any other readers have dealt with worms on their leather couches, we invite them to share their experiences below.

Article Name
Could Worms Found on Leather Couch be Mealworms?
Description
One of our readers has been discovering worm-like organisms on his leather couch. We think the specimens might be mealworms, or some other type of larvae.
Author
Dori Franklin
Comments: 2 Posted by: Worm Researcher Dori Categories: Meal Worms