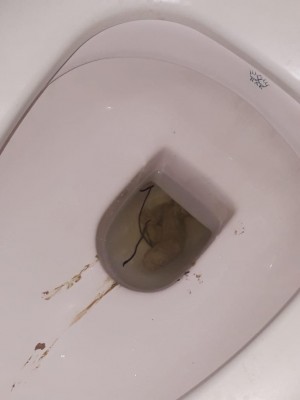 After giving his five year old daughter a dose of albendazole (anti-worm medication), this reader from India wrote to us about the worms he discovered after his daughter used the toilet. The worms were found “wriggling around” inside the toilet together with his daughter’s stool, and appear to be, as described by our reader, “smooth and dark in color.” 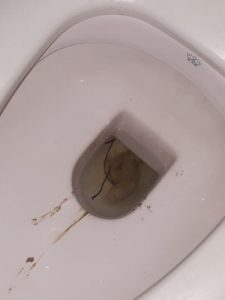 Our reader wonders if his daughter passed the worms, or if they were preexisting in the toilet. He is concerned that the worms are human parasites, which is why he gave her the medication to begin with. According to him, his daughter had been experiencing a loss of appetite and weight, as well as nausea for two months prior to taking the albendazole. Firstly, it will be vital to inform our reader that we will not be able to provide a positive identification of the worm given that this situation is medical in nature. This situation calls for a professional to ensure that he gets the most accurate diagnosis, as well as the best treatment for this issue. For this reason, we urge our reader to take his daughter to see a medical professional. He may also want to consult a parasite specialist for further opinions, which he may do by searching for “infectious disease physician (name of city).”

Secondly, even if we were capable and qualified to identify the worms, the situation, as well as the valid questions posed by the reader, makes it extremely difficult to do so. On one hand, if one were to assume that these worms were parasites, which one might, ?—given the symptoms experienced by the daughter, and the fact that it appeared after taking an anti-worm medication?— then they most resemble tapeworms or horsehair worms. However, tapeworms most often come out in segments, rather than as entire worms. Likewise, horsehair worms are not, with the exception of a few rare cases, parasitic to humans, nor pets or livestock, but only insects. On the other hand, as our reader mentioned, these worms could have been in or near the toilet already. Who is to say that these worms were not waiting in the pipes for some organic matter to come their way before appearing?

Nevertheless, the facts that we do know are this: our reader’s daughter is experiencing symptoms typical of an intestinal parasite, she is taking medication for worms, and worms have been found in the toilet after she uses it. This is more than enough to merit a consultation with a medical professional. Perhaps our reader already consulted a doctor, and this is where he got his medication, but in that case we recommend seeing a parasite specialist if the symptoms do not improve or disappear.

In conclusion, we are not sure as to the identity of the worms our reader found in the toilet. Regardless, we encourage our reader to follow the advice detailed above and wish the best of luck to him and his daughter.

Article Name
Concerned Father Wonders if His Daughter has Parasites
Description
After giving his five year old daughter a dose of albendazole (anti-worm medication), this reader from India wrote to us about the worms he discovered after his daughter used the toilet. The worms were found "wriggling around" inside the toilet together with his daughter's stool, and appear to be, as described by our reader, "smooth and dark in color."
Author
Worm Researcher Anton
Share the knowledge

This many people searched for this info: 4,512