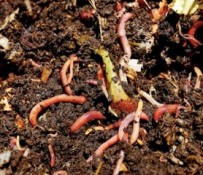 A reader wrote to us recently seeking “more information on the economic side of commercial worm farming.” He is wondering about the cost of worm farming, and also how much money one can expect to make from worm farming. For a number of reasons, this is a complex question to answer. The economics of starting any business is complicated, even if you know a lot about the product you are selling (in this instance, worms and worm castings). That said, we do know a bit about worm farming, and so by extension we know a bit about its commercial aspects, so below we offer a brief overview of commercial worm farming as a business, as well as point to some helpful resources.

As implied above, there are essentially two main kinds of commercial worm farming operations. (There are ways to combine both aims in a single operation, something Unco Industries specializes in.) The first type seeks to harvest worm castings that can be sold as fertilizer. Worms like Eisenia foetida (often simply called “red worms“) are excellent at converting certain organic materials (like fruit and vegetable scraps) into nutrient-rich soil that can be sold to gardeners or other individuals interested in growing plants. The good thing about this type of operation is that it is reasonably simple and cheap to set up, at least on a small scale, as can be seen in our article about how to make a worm farm. After an initial investment in worms and a worm bin, you can to an extent step back and simply wait for the worms to produce their castings, and what keeps the worms producing castings (the organic materials of a compost bin) is waste in the eyes of almost everyone and thus can generally be had for free. The worms will also naturally reproduce and the population will in fact expand, so you don’t have to keep buying worms.

The other main type of commercial worm farm aims to produce worms themselves. It is the worms that are sold, not the byproduct of their digestive system. There are many types of such operations, so there isn’t a straightforward or universal way to set up a farm that produces worms to sell. Some of these worm farms are actually like the composting operations we spoke of above. This is the case with Phoenix Worms, which are good worms to use for animal feed. (For the record, the red worms you use in a composting operation are also used for animal feed, so it is possible to set up a farm that produces both castings and worms for sale.) Other operations that harvest worms to sell are nothing like composting operations, however. For instance, Catawba worms are a popular fish bait, and the way to harvest them is to plant Catawba trees so that the worms (which are actually caterpillars) can infest them, and then once the trees are infested, they can be collected.

The bottom line is that it would be a large undertaking to create a commercial worm farm that serves as one’s sole source of income. The vast majority of people who worm farm do it only for personal reasons – they want the fertilizer for their own gardens, for instance, or fishermen want to use the worms they harvest as bait. Considerably fewer people have a worm farming operation for commercial purposes, and for the most part these operations are a side project and are only a way to make a little extra cash. Of course, there are a select few who are exclusively worm farmers, but unless they were born into the business, reaching this level was likely an extended process that took considerable investment (potentially years of hard work and many thousands of dollars – some larger worm farms operate in warehouses, and the leasing and upkeep of such a building alone could be very expensive).

We recommend that our reader start small (probably with a composting bin for red worms) to see the fruits of a smaller commercial worm farm. Perhaps he’ll find demand is high (no doubt after plenty of marketing) and he can scale up his operation, or he might find that worm farming is more trouble than it’s worth. In either case, if the initial effort is modest, he won’t have risked too much, which is always the aim of a person starting a business.