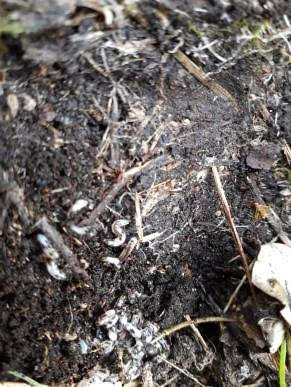 Today we will discuss some worm-like organisms that a reader discovered under stones in her garden. She wrote that she keeps finding large clusters of them and is curious about what they are. In the photo, we can see several of these worms among the sticks and dirt. We believe they are short, round with tapered ends, and light brown: 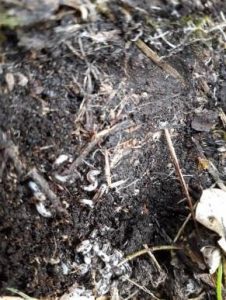 We can say with confidence that these aren’t earthworms or nematodes, both of which are commonly discovered in gardens. Earthworms have long, red, segmented bodies. They are excellent decomposers and important members of the ecosystem. Nematodes, which are often referred to as roundworms, are also soil-dwelling organisms. Like earthworms, some nematodes are helpful towards the environment by controlling pests populations. However, some nematodes are harmful, feeding on plant roots and causing plant death. Nematodes are microscopic, and we can easily see the organisms our reader found, so we don’t think they are a match!

We think our reader has most likely discovered either caterpillars or grubs. There are thousands of species of caterpillars, and they come in all different sizes, colors, and patterns. While some caterpillars live in trees and bushes, others burrow into the soil and live under rocks. Like caterpillars, there are also thousands of species of grubs (a.k.a. beetle larvae). Most grubs are white or off-white with brown heads and typically live in the soil where they eat the roots of plants and grasses. Based on the picture, we aren’t sure if our reader has discovered caterpillars or grubs!

If our reader is still anxious to identify these creatures, we invite her to send us a detailed description of the specimens, the plants in her garden, or a clear photograph. She can also do some research on grubs and caterpillars to see if either seems like a match! Since our reader didn’t mention plant damage or concern, we don’t think she needs to worry about finding these worm-like organisms in her garden!

Article Name
Clusters of Worms Found in Garden Under Stones
Description
Today we will discuss some worm-like organisms that a reader discovered under stones in her garden. She wrote that she keeps finding large clusters of them and is curious about what they are.
Author
Dori Franklin
Share the knowledge

This many people searched for this info: 2,407