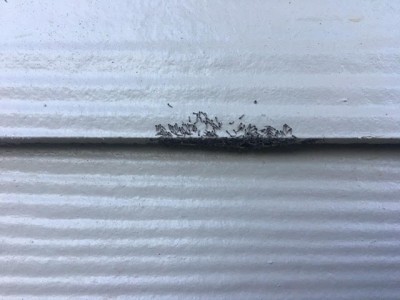 Cluster of Worms On Side of House are Moth Larvae

October 3, 2018
A reader reached out to us about a cluster of worm-like organisms she noticed on the side of her home. She wrote,”When I disrupted them, they started to fall via a silk or web-like substance. They have clear bodies and black heads.” The first photograph she sent shows exactly what she described: a cluster of worm-like organisms on the side of her house. 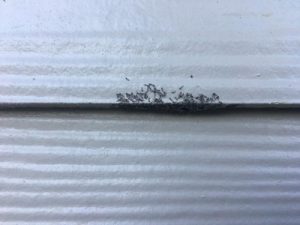 We have written several articles in response to readers in similar situations, readers who have found clusters of worm-like organisms on their walls, windows, and blinds. We are confident that this reader has discovered the same organisms as those readers. We believe these specimens are moth larvae, or caterpillars. 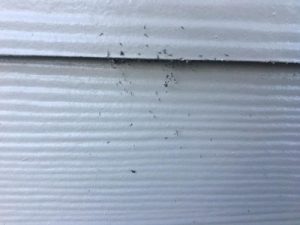 To be specific, we think these are inchworms! Inchworms are the larvae of geometer moths. They earned this nickname because of their funny way of walking. They measure the earth “inch by inch” as they move! They are also called spanworms, cankerworms, measuring worms, and loopers. There are about 35,000 species of inchworms around the world and about 1,400 of these are found in North America. We don’t know the exact species of inchworms our reader has discovered.

So, what are these larvae doing on the side of our reader’s house? Well, we can’t confirm this with 100% certainty, but we think a female geometer moth laid her eggs on the side of the house where our reader found the cluster of larvae! Moths tend to lay their eggs on whatever surface they want their larvae to eat. For example, many lay their eggs on the underside of a leaf so that the larvae can simply begin eating when they hatch. Another insect might have died right where these larvae appeared, and they could be feeding on the remains of the deceased (yuck!) If our reader wants to get rid of these inchworms, she can simply wipe down the siding of her house where she found them. Since they aren’t camping out inside of her home, we don’t think she should be stressing out about them!

To wrap up, one of our readers discovered a cluster of creatures on the side of her home. We believe these specimens are inchworms. They are harmless and shouldn’t be a source of worry!

Article Name
Cluster of Worms On Side of House are Moth Larvae
Description
One of our readers discovered a cluster of creatures on the side of her home. We believe these specimens are inchworms. They are harmless and shouldn't be a source of worry!
Author
Dori Franklin
Comments: 0 Posted by: Worm Researcher Dori Categories: Caterpillars, Inch Worms