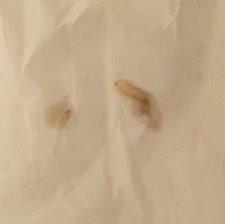 Clear Worm in Rug is a Clothes Moth Larva

A clear, white worm was found in this woman’s rug in Vegreville, Alberta, and she asks that we identify it.

Other than the fact that our reader is located in Alberta, Canada and that the worm was found in her rug, the only other context she provided was the fact that the worm in the photograph is dead, because she killed it. Given the worm’s ‘smushed’ state, it is difficult to get a good grasp of what this critter normally looks like and what its characteristics are. Despite this, our best guess at what this creature might be is some kind of clothes moth larva. This is simply because of its seemingly nondescript appearance (being white and semi-transparent being its defining characteristic) and the location in which it was found.

The two most common household clothing moths are the webbing clothes moth, and the casemaking clothes moth. The larvae of both of these species look similar, but the casemaking moth larva is distinguishable by what it leaves in its wake. If one’s home is infested with casemaking moths, one is likely to find tubes of spun silk that the larvae of these moths leave behind, hence the name ‘casemaking’. However, both species may leave behind faecal pellets, patches of silk webbing, or holes in the fabrics they eat, which leads us into the next point.

Why does the location of this worm give away its species? The sole food source for clothes moth larvae is, well, clothes. Or rather, fabrics to be more specific. These pests will chew through clothing, curtains, upholstered furniture, and rugs/carpets, and it is at their larval stage that clothes moths do the most damage. This is what makes them so annoying, because most households will have fabrics in so many areas of the house, and ridding one’s home of a clothes moth infestation can be a lengthy process. Of course, we should stress that our reader only found one worm, and thus speaking too much on infestations in this context may not be appropriate. On the other hand, in the case that this is an infestation, we will redirect our reader to an article we wrote on webbing clothes moth larvae that includes methods of dealing with an infestation that is applicable to any species of clothes moth.

In conclusion, the white worm our reader found on her rug is most likely some kind of clothes moth larva. However, if our reader finds more of these larvae, and thinks they might be something else, we encourage her to contact us again with images of the larvae, preferably in a live state.

Article Name
Clear Worm in Rug is a Clothes Moth Larva
Description
A clear, white worm was found in this woman's rug in Vegreville, Alberta, and she asks that we identify it.
Author
Worm Researcher Anton
Comments: 0 Posted by: All About Worms Categories: Popular "Worm" Groups, Worms Found in the House, Worms Generally