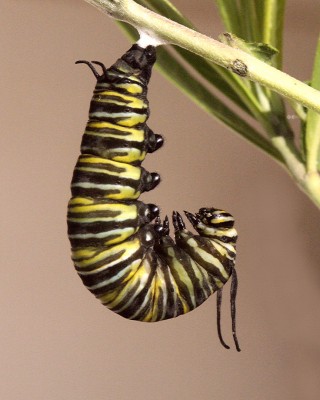 The term ‘caterpillar’ encapsulates an innumerable number of butterfly and moth larva species, but generally it is met with positivity. This article will delve into how the caterpillar has been viewed throughout history in terms of its symbolic meaning, as well as its role in mythology.

Firstly, let’s take a look at how caterpillars have been viewed symbolically. On a basic level, one can say that caterpillars are symbolic of transformation. This is because, as the larval form of butterflies or moths, all caterpillars must go through various stages of physical transformation in order to mature into a butterfly or moth. The given creature starts as a newly-hatched caterpillar, then after eating copious amounts of food, it eventually encases itself in a chrysalis of its own making (usually spun out of some kind of silk-like material, or as a hardened casing made from its own skin) to undergo metamorphosis. This metamorphosis is what gives caterpillars their symbolic significance. Metamorphosis is the incredible process by which a caterpillar, or rather a pupa, uses the mass amounts of energy it stored during its larval stage to, literally, transform its body into that of a butterfly or moth. Naturally, there is far more science behind it than that, but more importantly, it is this complete, physical transformation that provides the symbolism by which many get inspired to do their own transformation of sorts.

And so, on a deeper level, caterpillars are symbolic of the potential that everyone has within themselves to change for the better. Caterpillars are very common, and yet all have this incredible ability, and so we humans can take solace in the fact that maybe we all have an incredible growth waiting beneath our skin. Of course, we need to remember this is all symbolic, and the change we may all potentially go through refers more to changes in character, or career-path, or our love lives, and it does not mean we may someday sprout beautiful wings and fly away to suckle on flowers.

Secondly, we can delve into the mythology of the caterpillar. There are various accounts of caterpillars having some sort of significance in the mythologies of numerous cultures (many times as a result of their symbolic significance), an example of which is the Navajo culture’s narrative. The Navajo consist of a Native American people whose nation spreads over many of the Midwestern states in the USA. According to their legends, the sphinx moth caterpillar (otherwise known as a tobacco horn worm) held great significance among the Navajo. Not only was it revered for its practical purposes in tobacco-based medicine, but it also acted as a repellent of evil spirits and monsters in Navajo creation mythology.

Further to this, butterflies were said to be the providers of flint, a material Native Americans used to make horseshoes, and which was regarded as sacred. For that reason, caterpillars were also deemed sacred. And while a butterfly’s intentions were dubious (due to its vanity), a caterpillar could be trusted because of its simple appearance, which made it a wise adviser, and because of its many legs, which made it an experienced nomad, much like some of the Navajo were.

In conclusion, this article has provided a concise overview of some of the perceptions people have had of caterpillars throughout time in terms of their symbolic meaning, and as evidenced by their cultural significance in Navajo mythology, to name one. We hope that our readers were able to take away something interesting from this article, and that they remain mindful and safe during these hectic and strange times.

Article Name
Caterpillar Symbolism and Mythology
Description
The term 'caterpillar' encapsulates an innumerable number of butterfly and moth larva species, but generally it is met with positivity. This article will delve into how the caterpillar has been viewed throughout history in terms of its symbolic meaning, as well as its role in mythology.
Author
Worm Researcher Anton
Share the knowledge

This many people searched for this info: 1,264