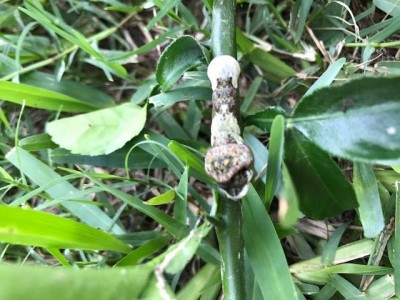 One of our readers found a caterpillar on her lime tree. She wants to know what kind of butterfly it will mature into. We believe this is a Papilio cresphontes larva, or a giant swallowtail caterpillar. A giant swallowtail caterpillar can also be referred to as an “orange dog” or “orange puppy. These butterflies and larvae are found mostly in the United States and Canada, and are especially abundant in Florida. They are also found in Mexico, Central America, Colombia, Jamaica, and Cuba. Here is the photo she sent us: 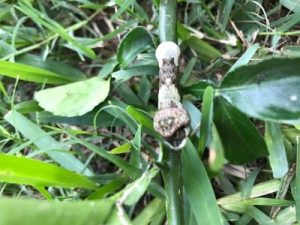 As you can see from the photograph, the giant swallowtail caterpillar has very interesting brown and olive green markings. Their camouflaged look allows them to hide in plain site on foliage and tree bark, disguised as bird droppings. These caterpillars feed on plants that belong to the Citrus family, including the lime tree. They are sometimes considered to be minor pests of the sweet orange, which is how they acquired their “orange dog” and “orange puppy” nicknames.

The giant swallowtail butterfly has dark brown or black wings with striking yellow bands. It can be distinguished from other similar looking butterflies by the small brick red patch on its hind wings. This butterfly is often cited as one of the largest in the United States and Canada! Giant swallowtail butterflies can be found in open woodlands and fields, where they drink nectar from herbaceous shrubs and plants. Their flight pattern can generally be described as high and fast, making them quite difficult to capture.

To wrap up, a reader sent us in photograph of a caterpillar she discovered on her lime tree. She asked us what type of butterfly it would mature into. We believe the species of the caterpillar and butterfly is Papilio cresphontes, more commonly known as the giant swallowtail.