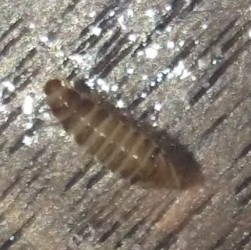 Carpet Beetle Larvae on the Walls

A reader asked us about some worms or larvae that he found on the walls of his house recently. Over the past two months, he has found three worms/larvae, so he doesn’t seem to be dealing with any sort of infestation, but the issue persists. The reader sent in two pictures and asked us if we are able to identify what he found. We are fairly certain he is finding carpet beetle larvae, which are of course larvae, not worms, and below we explain why we think this is the case.

First, here are the two pictures our reader sent in:

And here is another angle, either of the same exact larva, or potentially one of the others he found: 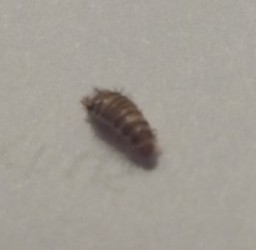 We can rarely offer an identification with certainty, and we suppose we can’t identify these as carpet beetle larvae with perfect confidence either. However, these creatures look just like carpet beetle larvae, which are frequently found in homes and are by far the most common type of creature we write about. During certain months, we could practically change the name of this site to All About Carpet Beetle Larvae. Thus, we have some experience identifying carpet beetle larvae, and it seems that this is what our reader found. The striped, brown bodies of the creatures suggests he found carpet beetle larvae, as do the hairs on their bodies and the overall shape of the larvae.

We do not know the exact species he found – “carpet beetle” is just a common name for the beetles in the Dermestidae family – but it looks like they might be the larval form of the black carpet beetle (Attagenus unicolor). Among other things, they eat keratin, a protein that is found in human and pet hair, so people with pets sometimes find them in their homes, although you wouldn’t need to have a pet to find them in your house. Although carpet beetle larvae often stay out of sight, staying in corners or under furniture, it wouldn’t be unusual to see them crawling around on the walls. Perhaps there are other carpet beetle larva around, and the reader only noticed the ones on the wall.

The reader doesn’t seem to have a major problem on his hands, so he should just remove the larvae he finds from his house and follow the cleaning advice in the articles linked to above. This should take care of the issue.

Article Name
Carpet Beetle Larvae on the Walls
Description
A reader asked us about some worms or larvae that he found on the walls of his house recently.
Author
All About Worms
Comments: 0 Posted by: Worm Researcher Evan Categories: Worms Generally